Chanderi cloth is composed of the tana, which is the warp or the length-wise, stretched out set of threads through which the bana or the weft is woven back and forth. Since the inception of weaving in Chanderi, till about 1920s, only white and off-white cloth was woven with its ends fringed with zari or golden thread. Only hand-spun cotton thread was utilized, even in the tana, even though it was barely strong enough to be held under tension. The then weavers were highly skilled workers as they had to be extremely careful while handling the delicate cotton yarn, producing an assortment of garments including safas, pagdis, dupattas, lugadas and saris.

Chanderi refers to a shimmering cotton fabric which is famous for being light weight and having sheer texture and glossy transparency. Practiced exclusively in a town called Chanderi in Madhya Pradesh, India, the art derived its name from. Saris weaved out of chanderi are best for summer wear. Motifs used in chanderi weaving are mostly inspired from nature (earth and sky). Few of them are Swans (hamsa), gold coins (asharfi), trees, fruits, flowers and heavenly bodies. Soft pastel hues characterize chanderi fabrics however, timeless combinations of bright colour borders on an off white base, or red on black, also exist now.

Chanderi, which is amongst the best known handloom clusters, occupies a special place because of its centuries old weaving specialty of producing finely textured fabrics of silk and cotton embellished with zari woven work, and more specifically because of its saris that have been patronized by royalty. Chanderi is known to have its origin back in the Vedic Period, and is believed to have founded by Lord Krishna’s cousin, Shishupal. The Chanderi produces three kinds of fabrics: Pure Silk, Chanderi Cotton and Silk Cotton. The motifs have come a long way from the traditional coin, floral and peacocks to the geometrics. Chanderi Saree, a product intricately woven by hand interspersed with the delicacy of the extra weft motifs that has for times immemorial satisfied the refined tastes of the royalty.

The Chanderi fabrics are known for their sheer texture, light weight and a glossy transparency that sets them apart from textiles produced en masse in factories. Traditionally, the fabric was woven using very fine hand spun yarn, which accounted for its delicate texture. So its quality, designs colors and motifs would be appropriate to cater the demands of an elite class family.

A beautiful blend of Cotton, Silk thread and zari results to Chanderi fabric”

A Chanderi fabric is famous by the name of Chanderi town in Madhya Pradesh. The fabric is a result of traditional methods of hand weaving that have been developed over the centuries and passed down through generations. Chanderi is primarily a weaver’s town, located near the river Betwa in Guna district of Madhya Pradesh. Around 60% population of Chanderi are involved in the manufacturing of Chanderi.As the fabric is woven by three kinds of threads the Cotton, Silk thread and Zari are imported from other regions in India as well as China, Japan and Korea. The chemical dyes are preferably used due to their fast acting quality. Traditional looms are used as a primary means of production. These include Pit, Dobby and Jacquard Looms. Most Chanderis have a rich gold border and two lines of gold on the pallu. Some have gold checks or little motifs (known as butis). The weavers involved in the process are long standing in trade and are well experienced. The Chanderi fabric is light weight and has intricate designs.

The Chanderi Fabric is also well known for its transparency and sheer texture. The transparency is a unique feature, which is not commonly or found in any of the textile product all over the country.

The transparency in Chanderi Fabric products is the consequence of Single Flature quality of yarn used. Flature yarn is the quality of yarn when the glue of the raw yarn is not taken out. The degumming of the raw yarn gives shine and transparency to the finished fabric. This quality is not found in any other fabric of the country and it is exclusive to the Chanderi Fabric. The special transparent yarn is used both in warp and weft of different varieties and configurations. The transparent yarn is cotton and as well as silk also.

The yarn used in Chanderi fabric is of high quality and extra fine. Because of non-degumming of the raw yarn, the finished fabric produced is extremely transparent and which in consequence result into sheer texture.

Chanderi is famous for its drape of saree with rich gold border at the ‘pallu’ and some selective ones having gold embellishments with lotus roundels or butis, spread all across the six yards.

Chanderi involve in production of three kinds of fabrics mainly:

DIFFERENT STAGES FOR THE PRODUCTION OF CHANDERI WEAVING

The raw material is purchased by the Master Weaver from the yarn dealers who in turn get the silk from Karnataka. The silk yarn used is largely imported Chinese or Korean silk. The cotton yarn is procured from places like Coimbatore in southern India and Jaipur, and is usually pre-dyed. The yarn dealers of cotton often get customized colors dyed as per the requirements. The minimum quantity required for such dyeing is almost 25 kgs or 10 hanks.

since long. The silk yarn dying process takes about 45 to 60 minutes depending on the colour.

The yarn is loosened or wound on reels. This is a prelude to the preparation of the warpand weft

For the weft the yarn is wound on pirns with the help of a charkha and this activity is usually performed by the members of the weavers’ family. Warping is a specialised process, which is performed by the warpers.

The warp yarns are wound on bobbins, which are arranged across a

wooden frame called reel. The yarns from these reels pass through a reed to be wound around a vertical drum. A warper in good times would warp 4 or 5 warps for 12 saris each.

5. PASSING THE WARP THROUGH THE REED

The next step is the task of passing the warp through the reed and the healds. The warp threads are then joined to the old warp threads with a deft twist of the hand of the women folk. This process takesapprox 3-4 days.

6. THE DESIGN OF THE BORDER AND THE PALLAV.

Before the actual weaving begins the weaver sets the design of the border and the pallav. The respective ends of the design are tied to a vertical harness called jala. This process takes anywhere between 3-4 days depending on the complexity of the design. The figured effects are produced with the help of an extra weft and the number of ’tillis’ i.e. the no. of weft yarns will determine the time taken. The amount of time taken reduces if the number of ply in the weft yarn is more and consequently the weaver can move faster and cover more ground. However in this case the output is less fine. Similarly higher the reed count more is the production time.

The weaving is performed by one or two very skilled weavers of the same family. The looms being used are largely traditional pit looms with throw shuttle. The Chanderi fabric does not require any post loom process and is cut off the loom to be packed and sold. Little is done by way of labeling and product specification or by way of customized packing methods.

The Chanderi zari, which is sourced from Surat, can either be real or tested. It comes in three separate shades:

Earlier the looms known as the Throw-shuttle pit loom were in use. Weaving on this was a very time consuming process and it required two weavers to sit side by side on the same loom. The Nal Pherma saris were woven on this loom which had one colour in one border, another in the other border and a different one in the body of the sari. Nowadays, however, only the Fly-shuttle looms are in use and these are operated by a single weaver.

The process of Chanderi weaving has the following steps:

Designing of fibre:-Two types of designing are done in the case of Chanderi weaving. One is the main design for the sari itself that contains various aspects like the border, the kind of motifs to be used, color combinations, etc. This is usually provided by the ordering party. This procedure is informal in the case of the local dealer but in the case of the big trading houses, a laminated paper with the design, the threads to be used and the location of motifs, etc., are provided to the weaver as a sample. The other is the more exquisite motif or booty designing which is done by the master weaver on a graph paper. This is provided to the weaver depending on the terms of the order.

Dyeing is an important part of the whole process, as both cotton and silk require dyeing before they can be used on the loom. The process of dyeing is normally carried out by specialized technicians who work for the dealer and are paid by him. There are different kinds of dyes for coloring silk and cotton. For cotton, a readymade fast color dye is used while for silk special dyes called Sando Silk are used which are also readymade dyes.

The process of dyeing starts with dissolving the readymade fast color dye in warm water. The threads are dipped into this solution and left for a while before being taken out. Depending on the quality of the dye, are dipped into the solution again for some time .

After this they are washed in with plain water and then soaked in a solution of warm water, detergent and soda. Finally, the threads are washed once more and hung on bamboo poles to dry. Once they are dry, they are sent back to the weavers for further processing.

Though Chanderi products have a high exportable value, it does not carry the same appeal. It is marketed to the local souk within the country. Only 10% of the total production is exported while the rest of the 90% is circulated within the national boundaries. As of the modern designs of the Chanderi, the demand of them has been fading slowly and gradually by the exclusive and highly fashionable class of buyers. The demand is now restricted to few dresses and evening party and other ceremonial outfits suited in summers. We should try to encourage the local art of the region to motivate the weavers to make better products meeting today’s trendy crowd.

Counting to the very luxurious, warm, breathable and lightweight fabric, home furnishing fabrics are very much in use nowadays. They have very effective role in living room for they are soft, wrinkle and stretch resistant and non-absorbent. The Chanderi fabrics are known for their sheer texture, light weight and a glossy transparency that sets them apart from textiles produced en masse in factories.

Chanderi weavers discovered Japanese silk. They began substituting this in the warps in cotton saris, and also developed a silk-by-silk variety in which their profit margins were higher. As a result, today, it is difficult to find a genuine cotton-by-cotton Chanderi sari in retail establishments. The problem of sourcing authentic Chanderi has been exacerbated by the development of many look-alikes available at cheape 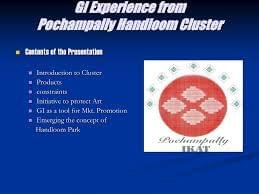 GI as an instrument for Sustainable Development: A Case of Pochampally IKat