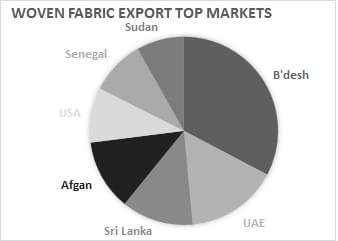 This July, fabric was exported to 137 from India, with Bangladesh being the largest importer, followed by UAE and Sri Lanka. The three together accounted for 27 per cent of total woven fabrics exported during the month. 10 countries did not import any fabric from India as they did last year. However, they were replaced by 11 countries which imported fabric worth US$1.40 million this July.

Djibouti, Seychelles, Romania, Latvia, Suriname, Ukraine, Botswana, Mali, Burkina Faso and Hungary were the 10 fastest growing markets for woven fabrics, and accounted for 2 per cent of total value exported during the month.

Woven fabrics made of 100% cotton accounted for 54 per cent of all fabrics exported, worth US$175 million (INR1,200crore) with volumes at 204 million sqmetres. The average unit price realization was at US$0.86 a kg.

Denim Exports on the Rise

Plain fabrics accounted for 65 per cent of all kinds of woven fabrics exported in July 2019 and were up 15 per cent in year on year comparison. Shipment totaled 294 million sq meters values US$210 million. Bangladesh, Afghanistan, United Arab Emirates, Senegal, Sudan and USA were the top markets for plain fabrics worth US$80 million. Denim was the second largest woven fabric exported in July (US$42 million), posting an increase of 48 per cent year on year. The largest export market for demin was Bangladesh, followed distantly by Egypt and Colombia. Denim exports to these markets were worth US$25 million. Shirting/suiting and sarees were the other top fabrics exported from India in July this year. The European Union has unveiled a new textile strategy