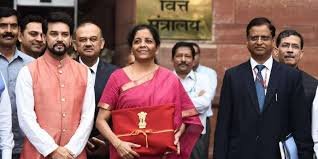 The Hon’ble Union Finance Minister Mrs. Nirmala Sitharaman today presented her second Union Budget 2020-21 in the Lok Sabha after NDA Government returned to the power for the second term.

Shri T. Rajkumar, Chairman, CITI congratulates the Hon’ble Prime Minister of India, Finance Minister, Textile Minister and Commerce Minister for bringing out the Union Budget 2020-21 focusing on Aspirational India, Economic Development and a Caring Society, which will give the much needed impetus to the Indian economy.

Chairman, CITI stated that the good thing is that the fundamentals of the economy are very strong and provides the macro-economic stability to the country. Even, the Government has estimated the nominal growth of GDP pegged at 10% for the year 2020-21 on the basis of trends available. He further pointed out that India is the fifth largest economy of the world and India’s foreign direct investment has got elevated to the level of US$ 284 billion during 2014‐19 from US$ 190 billion during 2009‐14.

Chairman, CITI expressed happiness over abolition of Anti-Dumping Duty (ADD) on PTA which is a basic raw material of the MMF Segment. He pointed out that if Indian textile industry has to achieve the market size of US$ 350 billion by 2025, it couldn’t have been done by without making our raw material available at an internationally competitive price. Hence, the above decision is a very welcome step in the right direction as it will help the downstream textile value chain to strengthen its position in the textile world map.

CITI Chairman, thanked the Government for proposing the National Technical Textiles Mission at an estimated outlay of Rs.1480 crore from 2020‐21 to 2023‐24 as India imports significant quantity of technical textiles worth US$ 16 billion every year with an aim to reverse this trend and to position India as a global leader in Technical Textiles.

Mr. Rajkumar stated that the decision of the Government to digitally refund duties and taxes levied at the Central, State and local levels under RoDTEP to the exporters, such as electricity duties and VAT on fuel used for transportation, which are not getting exempted or refunded under any other existing mechanism at the earliest will help the exporters resurrect their position in the international market.

CITI Chairman also thanked the Government for considering our long standing plea to review Rules of Origin and Free Trade Agreements (FTA) to curtail cheap imports from other countries and boost our exports. The above decision will help the Indian T&C Industry in the long run since its counterparts are already enjoying FTAs benefits with the EU and USA which are the major export destinations of textile products.

Chairman, CITI also thanked the Hon’ble Union Finance Minister for considering extension of the debt restructuring window by another one year for more than 5 lakh MSMEs. Government e‐Marketplace (GeM) for creating a Unified Procurement System in the country for providing a single platform for procurement of goods, services and works will offer a great opportunity for MSMEs. He also thanked the Finance Minister for removing Dividend Distribution Tax (DDT) and decriminalise the civil offences under Companies Act.

On the fund allocations for the textile sector for 2020-21, Mr. Rajkumar commented that this year, the Government has given special emphasis on Infrastructure, Research & Capacity Building and A-TUFS by enhancing allocations by 98.1%, 79.8% and 54.1%, respectively as compared to last year.

Mr. Rajkumar also pointed out that stable and predictable business environment is key for the government. The proposed Investment Clearance Cell will provide “end to end” facilitation and support to the new investors. He also commended the launch of new scheme, NIRVIK which will provide for higher insurance coverage, reduction in premium for small exporters and simplified procedure for claim settlements and development of each District as an export hub. Further, an investment of 103 lakh crore on infrastructure development and the National Logistics Policy will create a single window e‐logistics market and focus on generation of employment, skills and making MSMEs competitive.

CITI Chairman concluded by saying that New Education Policy and’Skill India’ emphasis government’s commitment to provide relevant skill training to the youth in the country which can be a sourcing hub of human resources to the world in near future.

Revival on, India will be fastest growing economy next year: FM.