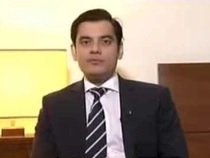 Even if markets fall, Rajat Sharma, Founder & CEO, Sana Securities, does not expect this stock to fall a lot more from here. He expects this stock to have a 100% upside in the next two -three years.

Do you have enthusiasm for SBI for the long haul?
I have been very negative on public sector banking for years now and the reason is that I have always believed that their managements are not streamlined. They have a lot of obligations in terms of waiving loans from time to time. They are not technologically updated. But I do believe that at SBI, the interest income that they earn quarter on quarter has broadly remained the same. Even for the June quarter, it was marginally higher. They have taken a hit on other income and I do not know why that is but they have taken a hit on their other income. Their interest income has been about Rs 70,000 crore on a quarterly basis and that is in line with what they have been reporting but the stock price has corrected almost 50% from where it was.

I am negative on financial services because I expect that if markets fall, a lot of the bulk sale will happen across mutual funds and there is a lot of holding in SBI and other financial stocks. So to that extent, the stock will fall. When I compare SBI with other private sector banks, it looks like this stock has fallen a lot more than it should have. So I would not rule out the possibility of a bounce back here which would be percentage terms higher than the bounce back you will see in private sector banks.

Having said that, I will make it clear that I do not own this stock. I do not intend to because it does not fit in my rationale for investing. I think public sector companies suffer. I may, however, hold it for trading from time to time if I feel that a lot of these PSU stocks are trading at a price much lower than where they should be. There are other PSU stocks which I am interested in right now. I can talk about that but I do believe SBI is deeply undervalued.

Which are the other PSUs which interest you?
There is one stock that I have been looking at, a stock which I had in my portfolio until 2016-17 and this is ONGC. The reason is the stock has fallen about 60-70% from its highs and the reason is obviously oil was not selling. There was a complete lockdown and so crude oil prices were done, In fact, it started trading negative at one point earlier this year but that still does not justify ONGC to be trading at Rs 70. This is a stock which on a quarterly basis, reports a gross revenue over Rs 100,000 crore and in June they reported Rs 62,000 crore.

I do expect that going forward, the demand for oil would come back to pre Covid levels by the end of this year at which point, this stock should bounce back quite sharply. It has got a great dividend yield, it has no problems in terms of debt on its books. This is a kind of monopoly which compels an investor to buy at Rs 70 odd levels and that is one stock which I have added to my portfolio and for anybody who wants to stay invested for a few years, even if markets fall I do not expect this stock to fall a lot more from here. I would not be surprised if this stock does a 100% upside in the next two -three years. At Rs 70 it is very, very attractive.

What about the capital goods sector and L&T in particular?
More than earnings being hampered for this quarter, I would be worried about new order procurement because with the way the fiscal situation is, their biggest orders still come from the government sector and the government does not really have any money to fund big orders and make big infrastructure projects.
L&T has fallen a lot and even after the recent bounce-back, it is still trading at valuations far below it used to trade at but for a good reason. Fundamentally, there has been a dent in the infrastructure sector and I do not really like capital goods space much at this time. I would much rather prefer sticking to pharma, IT and I do not see any reason why infrastructure or capital goods will do well at least on an immediate basis.
What about Vedanta NSE -1.20 %? What would you advice shareholders to do?
Since the time Cairn India was merged with Vedanta, I have been saying that this is a bad and corrupt management. They have done this before. They are doing it again with Vedanta. They are trying to buy out the company at a price where somebody should come in and say we would like to buy the promoters’ stake from the promoter at this price and the same story is being repeated as it happened at the time of Cairn India.
Cairn India was a very cash rich company when they merged it with Vedanta and today Vedanta stock price has fallen so much and this is not the time to do a delisting of the company. I would be happy to see LIC not sell its stake but again at the time of the Cairn-Vedanta merger also, eventually LIC did sell its stake. So if you are unfortunately a shareholder of Vedanta, first of all you should ask yourself why you bought into this company because everyone knows on the Street that this is a company with a dodgy history and very bad corporate governance in the past.
If you are holding on to this stock, I do expect they would probably up the price at which they want to buy back and probably make a few bucks extra but nothing in there. I do not own the stock, I do not ever want to own these kinds of companies.
Besides IT, pharma the other theme which is really sought after has been speciality chemicals. Do you see a big re-rating there?
No absolutely not. In fact, in speciality chemicals I have absolutely no idea why this theme has become a darling of a lot of fund managers. I see nothing that has changed for this space really. But the way some of these stocks have been running up in an extremely overvalued market kind of worries me.
a), I do not understand this space very well;
b), every time I look at stocks in this space they are trading at valuations which frankly I do not understand. Nifty is trading at a price earnings multiple of 34. I have not seen that in the last two-and-a-half decades. Specialty chemicals is just one of those flavours of season and these are typically the kind of sectors which should be avoided.