This ‘ethical’ and ‘sustainable’ phone is made from recycled plastic Fairphone , known for making “ethical, reliable, and sustainable” smartphones, has launched its latest model, the Fairphone 3+, in Europe. It arrives as the successor to the Fairphone 3 that was announced last year.

The handset features a modular design that provides hassle-free at-home repairs and has been constructed with over 40% of recycled plastic. 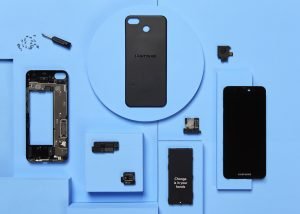 The Fairphone 3+ offers an all-black plastic body with a conventional rectangular display and thick bezels. On the rear, it packs a single rear camera setup and a physical fingerprint sensor.

The handset bears a 5.65-inch Full-HD+ (1080×2160 pixels) LCD screen with an aspect ratio of 18:9. It also comes bundled with a screwdriver that can be used to swap the internals at home.

For the shutterbugs and selfie lovers

The Fairphone 3+ features a single 48MP (f/1.8) rear camera with a dual-tone flash. On the front, it offers a 16MP (f/2.0) selfie snapper. According to the company, customers can also upgrade the rear camera by using a newly-launched module.

The Fairphone 3+ draws power from an octa-core Snapdragon 632 chipset, paired with 4GB of RAM and 64GB of expandable storage.

The handset runs on Android 10 and packs a removable 3,040mAh battery.

How much does it cost? Pioneer In Textile Innovation, Donear Group Gears Up  For The Times Ahead With A Sustainable Approach