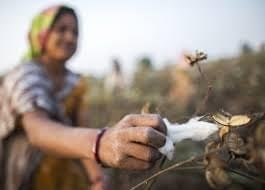 In a move which may benefit nearly 8 million cotton farmers across the country, the Centre has reduced Bt cotton seed price by reducing the royalty fee payable by domestic seed firms to developers of this genetically modified variety. Under the new price, notified by the agriculture ministry on Friday, the farmers will have to pay maximum Rs 730 per packet of 450 gm (including Rs 20 for royalty) for Bt cotton seed of Bollgard (BG)-II version this year as against Rs 740 (including Rs 39 for royalty) last year. The new MSP include Rs 20 per packet as trait fees (royalty) this year as against Rs 39 per packet last year. It means while the farmers will have to pay Rs 10 less per packet this year as compared to 2018 season, the domestic seed firms will be the bigger beneficiaries as they will have to pay Rs 19 less per packet as trait fees to the developer (innovator of transgenic variety of cotton).
The move to reduce MSP of Bt cotton seed comes amid demand of several organisations, including the RSS-linked SwadeshiJagranManch (SJM), for complete removal of trait fees. The co-convener of the SJM, Ashwani Mahajan, on March 1 had written to the Prime Minister NarendraModi, seeking his intervention for removal of trait fees in the MSP of Bt cotton seeds. The move of slashing royalty may demoralise the technology developers and they won’t come out with new varieties if the older ones turn out to be ineffective in next couple of years,” as per Vijay Niwal, cotton farmer of Yavatmal district in Maharashtra. New textile policy for overall development of the sector in works: Smriti Irani