Powerloom Industry is the major contributor to Indian Textile industry as 62% of the textiles production in India is done on Powerlooms. Indian Powerloom Industry is equipped with 2.43 million registered looms producing 54,000 sq. mtr fabrics and accounting for 57.45 lakhs number of direct & indirect employment. It is concentrated in clusters across Erode, Salem, Madurai, Ichalkarnaji, Solapur, Bhiwandi, Bhilwara and Malegaon, among others.  The industry produces wide range of fabrics ranging from grey, printed fabric, dyed fabric, cotton fabric, various mix of cotton, synthetic, and other fibres. In fact, Powerloom sector is major contributor in our export earnings. USA, EU, China, UAE, Vietnam, Sri Lanka, Saudi Arabia, the Republic of Korea, Bangladesh, Turkey, Pakistan, and Brazil are some of the major markets for these exports.

The city that lies 50 km on the northern fringe of Mumbai has 10 lakh power looms that weave nearly one third of the cloth that the country wears, and has 7 crore sq ft of warehouse space. Bhiwandi’s textile industry was promoted by migrant Muslim weavers from Uttar Pradesh and Bihar fleeing the wrath of the British after the 1857 uprising. Nothing much has changed in the way this age-old craft is practiced apart from the industry making the transition from handlooms to power looms. According to Mr.Faizan Azmi, the septuagenarian head of the Maharashtra Powerloom Federation, the umbrella body of the power loom owners “The government has neglected this sector and this town. Its policies are flawed for the simple reason that rather than providing financial help to those who do no not have access to credit they are designed to provide help to bigger players who have easy access to money. These policies are pushing smaller and marginal people out of business.” He further adds “Grey from Bhiwandi, even today, is sent to other centres for further processing into finished fabric. We sell the cloth for anything as low between Rs. 10 to 25 per metre. After processing which happens outside of Bhiwandi, the same cloth can be sold for anything upward of Rs. 150 per metre. In the last 150 years there have been no concrete steps or government help in processing this cloth in the city itself.” Higher operational costs and lack of modernisation have also hurt the industry.

Erode has approximately 3, 00,000 powerlooms. The units make grey and yarn-dyed fabric and catered mainly to the domestic market. Main province for this powerloom is at Vellakoil in Kangayam Taluka. 33% of power looms are located in this area and they are in unorganized form and most of them are running the units on job work basis.

Most of the Powerloom clusters in India are still using obsolete plain looms. Due  to  outdated  technology,  looms  run  at  a  very  low speed  and  manufacture  narrow width fabric. Most of the powerlooms are rejected looms from Mumbai’s textile mills, and   other   second   hand   powerlooms. Because   of   this,   loom’s depreciation & maintenance cost is very high.  It results in increase in the operating cost and the overall cost of production also increases. Moreover, the  productivity  of  plain powerloom  is  very  low  as  compared  to automatic,  shuttleless  and  semi-automatic  looms.  The plain looms can only produce 80 meters of fabric per day whereas the automatic looms are 6 times productive than the plain looms.  Moreover, these looms require low depreciation & maintenance cost. The cost of production is also very low as compared to plain looms.

Most of the labors lack good technical knowledge. They are working on same age old technology. They are not been trained for increasing productivity & efficiency.  The labor trainings play very important role here, but most of investors hesitant to invest into labor training programs.

Marketing  of  the  powerloom  products  is  one  of  the main  problems  which becomes a  challenge  for  the  owners  of  powerloom  industry.  Mostly,  the  weavers  are uneducated  or  less  educated  and  are  unable  to  estimate  the  demand  of  their  products according  to  the  need  of  the  market.  They  are  unaware  about  economic  norms  like demand  &  supply  and  business  ethics.  They are dependent on the middlemen to sell their products. The middlemen purchase the products from them at low prices and sell the same at higher prices.  The  middlemen  exploit  the  powerloom  owners,  the  rates  of  finished  products are  not  measured  on  the  basis  of  cost  of  production but  by  the  bargaining  of  the middlemen  i.e. merchants & commission agents.  So the main surplus goes to the middlemen. In terms of numbers, the cloth merchants and commission agents are very less as compared to the powerloom units. The merchants and agents are united while the powerloom owners are dispersed. So, the buyers have more bargaining power and sellers are dependent on the buyers. These middlemen mostly control the situation in their favor to earn significant profit.

The  majority  of  the  weavers  start  their  business  with  the  self-finance.  They don’t  have  adequate  supply  of  finance  to  modernize  their  powerlooms which will have greater productivity and better quality of fabric. Moreover, they don’t have  sufficient  capital  to  pile  up  the  stock  of  raw material  when  the  prices  are  low. Because  of  these,  they  purchase  the  yarn  at  higher prices  and  sell  the  cloth  at  lower prices, which results in losses.

In order to overcome above issues, the Ministry of Textiles launched Comprehensive Powerloom Cluster Development Scheme (CPCDS) for development of Powerloom Mega Clusters at Bhiwandi (Maharashtra) and Erode (Tamil Nadu) in year 2008-09 during the 11th Five Year Plan. Subsequently, the Government further announced development of two more Powerloom Mega Clusters at Bhilwara (Rajasthan) in 2009-10 and at Ichalkaranji (Maharashtra) in 2012-13. The scheme is further continued to 12th Five Year Plan. However, the overall limit of CPCDS grant has been decreased to Rs. 500 million during the 12th Plan from the existing Rs. 700 million. The most important change approved in the modified guideline is that the Government to private funding ratio would be 60:40 instead of the existing 40:60. The scheme aims at creating world-class infrastructure, common facilities, technology up-gradation, skill development & creating marketing platform. It will help in creating facilities like road networks, uninterrupted water & power supply, common facilities like ETP, captive plants common warehouses, training centres & workers’ hostel.

Out of total 2.43 million registered looms, only 1.05 Lakhs looms are shuttleless. Our Powerloom sector is characterized by smaller units. Most of the powerlooms are currently running on obsolete technology, so the loom speed & production is very low with high maintenance cost. This in turn shrinks the overall profit margins of Powerloom sector. The owners should understand the fact that instead of continuing with age old obsolete technology, they should adopt new shuttle-less technology which offers higher speed, low maintenance cost & in turn giving higher profit margins. Most of Powerloom industry players only manufactures for job work where middleman/commission agent is involved, hence they hardly have any control over the pricing. The Powerloom Industry players should understand the fact that, instead of only relying on job work & supplying grey fabric to the industry, they can do value addition & supply finished fabric where profit margins are higher. It is needed them to market their products directly to the markets rather than relying only traders or middleman who eats most of the profits. This will give them control over prices. All Powerloom Industry players should come together & form common platform to address the issues of the industry effectively. Furniture Brand WoodenStreet to Invest about $2 Million on Expansion of 50 + Stores; Strengthening Its Network within 1 Year Maintenance at aromatics plant in Rotterdam in March-April-ExxonMobil 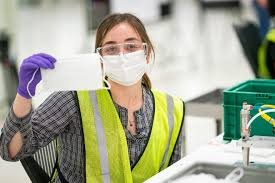