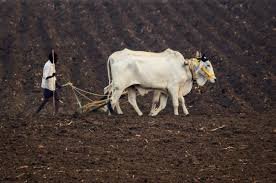 Of all the controversial reforms Prime Minister Narendra Modi has sprung on the market, the recent laws to liberalize farm sales could turn out to be the most far-reaching.
In a fractious and unruly session last month, parliament passed three laws that some say could pave the way for India to upend the global food trade, while others fear it will wreck the livelihoods of millions of farmers. Within days, rural groups and opposition leaders launched public protests.

The move toward a free market for farm sales goes to the heart of a system that directly affects more than half of the nation’s 1.37 billion people, altering government controls that millions of families have come to rely on, but that have hobbled the nation’s efforts to productively farm one of the largest areas of fertile land on earth. If they succeed, India could not only feed itself, but become a major food exporter.

“We need private sector investment in technology and infrastructure for Indian agriculture to realize its full potential and compete better in the global marketplace,” said Siraj Chaudhry, managing director and chief executive officer of agriculture services company National Collateral Management Services Ltd. But the government must make its intent very clear to win over skeptics. “This is a major policy change that impacts a large and vulnerable section of the population.”

India processes less than 10% of its food production and loses about 900 billion rupees ($12.3 billion) a year due to wastage from inadequate cold storage, said Amitabh Kant, chief executive officer at government think tank NITI Aayog.
Modi has a long resume of contentious policy steps, including a ban on high-value cash notes, the biggest tax reform since independence in 1947 and the world’s toughest coronavirus lockdown rules. The latest seems mild by comparison: a set of amendments to laws that govern the purchase, sale and storage of farm produce.

Yet eight opposition lawmakers were suspended for unruly behavior when the new bill was passed and groups representing farmers and political parties organized demonstrations, sit-ins and tractor rallies in grain-producing states such as Punjab, Haryana and Madhya Pradesh.

Shiromani Akali Dal, a long-term supporter of the ruling Bharatiya Janata Party, which rarely went against the decisions of Modi’s coalition, quit the government. It said farmers fear the measures will eventually kill the government’s price support regime for crops and leave them at the mercy of big corporations that would control the market.