MoU signed by the Handlooms and Textiles department

The Handlooms and Textiles department has recently signed a Memoranda of Understanding (MoUs) with the reputed organisations such as Indian Institute of Chemical Technology (IICT), Indian School of Business (ISB) and United Nations Development Programme (UNDP) on Friday to propel the growth of handlooms and textiles industry in the State as also to ensure better livelihood for weavers in the presence of Handlooms and Textiles Minister KT Rama Rao during the National Handloom Day virtual celebrations .

The MoU with ISB focus on examining the implementation and performance of State-run policies for the weaving community in the State. The MoU with IICT will focus on conducting applied research on development of sustainable textile yarn dyeing and reduce the hazardous impact of dyeing on weavers and the environment. The next MoU with the UNDP-India is targeted to uplift the livelihood of the weavers assisting the weavers with skill upgradation and market linkages.

The Handlooms and Textiles Minister Rama Rao says that about 40,000 families were depending on handloooms and textiles for livelihood in the State. He instructed the officials to prepare proposals for continuing with the much-appreciated ‘Nethanna ku Cheyutha’ (Thrift) scheme. He mentioned in the meeting that the state government will provide relief to weavers considering the Covid-19 pandemic situation. The relief structure a transfer money of grand sum of Rs 93 crore to weavers lock-in period of three years. The minister proposed about 20,554 weavers were enrolled under the Chenetha Mitra scheme. The plan suggests Rs 7.92 crores was deposited into the accounts of 30,984 weavers and ancillary workers.

Rama Rao proposed the idea of establishment of more block level clusters across the State in addition to the existing eight block level clusters set up at Pochampally, Aleru, Kanukula, Shayampet, Kamalapur, Armoor, Veltur, and Vemulawada at a cost of Rs 10.2 lakh. There is also a grand sum of Rs 15 Crore provisioned for the revival of Pochampally Handloom Park and works on the proposed Gadwal Handloom Park. Towards the end, the minister exhorts the elected representatives and government officials to wear handloom clothes every Monday to increase awareness about handloom clothes and helping weavers. 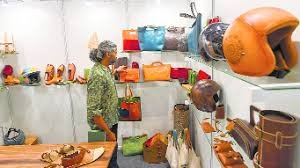 Worldwide shipments of new textile machinery down in 2019