The Mauritian economy has been recording a steady recovery from the pandemic. The economy grew by 4% in  2021 following a 14.9% contraction in the previous year. Positive contributions to overall growth came from  construction, manufacturing, agriculture, forestry, fishing and information and communication sectors while  tourism-related sectors contracted.

After a softening trend over the past two months, inflation measured by the consumer price index (CPI) accelerated  to 11% y-o-y in July 2022. Core inflation (which excludes food, beverages, tobacco, mortgage interest, energy and  administered prices) firmed up to a record high of 8.3% y-o-y. The Producer Price Index (PPI) for the manufacturing  sector rose by 1.4% m-o-m in June 2022 fuelled by an increase in prices of food products and beverages, furniture,  other transport equipment, rubber and plastic products, chemicals and chemical products. Price pressures on the  international as well as a domestic front have aggravated substantially since the onset of the Russia-Ukraine war.  Going ahead, the inflation trajectory would be contingent on the supply-side challenges and global commodity  prices. MPC Steps Up Fight Against Inflation

The Monetary Policy Committee of the Bank of Mauritius raised the Key Repo Rate (KRR) by 25 bps in its June  2022 meeting. This was the second successive rate hike taking the key repo rate to 2.25%, the highest level since  April 2020. The decision to raise the interest rate was unanimous by all members of the MPC. The MPC signalled  its objective to normalise monetary policy in order to contain inflationary expectations, promote price stability over  the medium term and create macroeconomic conditions conducive to supporting economic growth. The MPC also  noted that the inflation-growth dynamics will be critical in determining the timing and pace of further monetary  policy normalisation. The bank staff revised its headline inflation projection for 2022 notably higher by 190 bps to  8.6% (from its 6.7% projection of March 2022) citing the evolving geopolitical situation. The growth projection for  2022 was retained between 7-8%. It noted downside risks to the growth outlook emerging from the repercussions  of the conflict in Ukraine on the major trading partners of Mauritius, especially the Euro area.

In May 2022, the total merchandise exports slowed to a three-month low of MUR 6.2 billion recording a 10.7% fall  on a m-o-m basis while imports grew by 4.9% m-o-m to MUR 24.1 billion. Consequently, the trade deficit during  the month widened to MUR 17.9 billion from MUR 16 billion in the previous month. The top five export destinations  of Mauritius were South Africa, Madagascar, France, the UK, US and Spain and the top five import partners were  UAE, China, South Africa, India, France and Argentina. 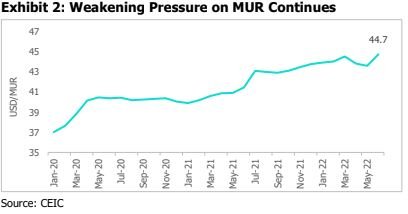 Mauritian Rupee Continues to Weaken; International Reserves Comfortable  The Mauritian Rupee weakened by 2.6% to a record low of 44.7 per USD in June 2022 compared with 43.6 per  USD in the previous month. During the 12 months ending June 2022, the currency weakened by 7.3% against the  USD. The gross official international reserves rose in June 2022 after having witnessed two successive months of  decline. The reserves climbed to MUR 346 billion, higher by MUR 38.6 billion compared with the previous month.  The MPC in its recent policy noted that the gross official international reserves were at a level sufficient to provide  a buffer against adverse external conditions. The current reserves represent import cover of 16.3 months.

The tourism sector has rebounded since the reopening of national borders from October 1, 2021. A total of 376,556  tourists have visited the island country since the beginning of this year up to June 2022. The number of tourist  arrivals in June this year was notably higher at 63,008 compared with 280 arrivals in June last year. The upbeat  tourist arrivals boosted the gross tourism earnings in May 2022 to MUR 4.3 billion as against MUR 0.1 billion in the  corresponding month of the previous year. The tourism sector has been exhibiting continued signs of revival with  the average spending per tourist having increased by 73% in the first quarter of 2022 compared with the pre-pandemic period. Increased flight connectivity and encouraging forward bookings for the coming months bode well  for the performance of the tourism sector.

During the first ten months of the fiscal year 2021-22, the government revenues increased by 30.3% supported by  a broad-based increase under all heads of revenue. Tax revenues accounting for the largest share (around 83%)  in total revenue rose by 24.4%. This increase in taxes has been driven by higher collections from the goods &  services tax (33% growth) and income, profits and capital gains tax (37.5% growth). The government expenditure  has increased by 9.7% during the ten-month period of FY22. The main focus area of government spending has  been compensation to employees which has more than doubled to MUR 61 billion in the current year. All heads  except compensation to employees and use of goods and services have recorded a decline in spending. Robust  revenues coupled with calibrated expenditure have helped restrict the gross operating deficit at MUR 39.5 billion,  lower compared with MUR 50.4 billion in the year-ago period.

Balancing Growth and Inflation to be a Major Challenge

According to the IMF’s Staff Report for the Article IV Consultation, the Mauritian economy is expected to record a  real GDP growth of 6.1% in 2022 with the tourism sector being the main growth driver. Inflationary pressures are  expected to be elevated owing to demand recovery, high commodity prices and depreciation in the Mauritian rupee.  The IMF noted that the risks for Mauritius are tilted to the downside due to the spill over from the Ukraine war and  rising global inflation levels which could be a dampener for global demand and tourism. Messe Frankfurt and Inexmoda launch Heimtextil Colombia, a bet towards the Americas