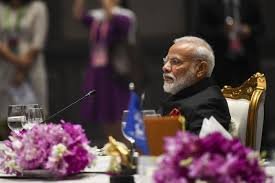 Prime Minister NarendraModi in Bangkok said India will not join China-backed RCEP deal as negotiations failed to satisfactorily address New Delhi’s “outstanding issues and concerns”. He made the announcement during his speech at the RCEP Summit here, which was attended by several world leaders, including Chinese Premier Li Keqiang.

“CII appreciates Government of India’s stance on addressing all outstanding issues before joining RCEP,” said Vikram Kirloskar, President, Confederation of Indian Industry. He said the CII will continue to support and work with government in its endeavour to integrate with the global economy through mutually beneficial trade agreements.

The long term interest of industry in India is to get well integrated in global value chains and beneficial trade agreements could play important roles in realizing this interest, said Kirloskar. FICCI President Sandip Somany said the chamber fully supports the prime minister’s decision against joining RCEP, as India’s several concerns remain unaddressed and various issues are unresolved so far in the proposed deal under negotiation.

In recent months serious apprehensions and reservations on RCEP have been expressed by a large number of sectors including steel, plastics, copper, aluminium, machine tools, paper, automobiles, chemicals, petro-chemicals and others, he said.

Further, there were not enough positive developments in the area of trade in services including easier mobility for our professionals and service-providers, Somany said. Traders’ body CAIT said Chinese products, which are very low priced and of substandard quality, are creating a disequilibrium in Indian markets. CAIT Secretary-General Praveen Khandelwal appealed to the prime minister that after “this landmark move”, the government should now work dilligently towards creating a more conducive environment for retail trade in India and also erase all anomalies and disbalances created by the Law violating e-commerce companies.

The dairy industry had expressed apprehension that the 16-nation trade pact would severely impact dairy farmers because of cheaper imports from Australia and New Zealand. Dairy major Amul MD R S Sodhi described the move as “daring” and “landmark” which will protect the interest of 10 crore farmers engaged in production of milk and related products. Sodhi said the Prime Minister has assured the industry that the government would protect their interest. If finalised, the RCEP would have become the world’s largest free trade area, comprising half of the world population and will account for nearly 40 per cent of the global commerce and 35 per cent of the GDP.

The sources said except India, all 15 RCEP member countries were on board in finalising the deal at Monday’s summit. Commenting on the move, All India KisanSangharsh Coordination Committee (AIKSCC) it is happy that “good sense” has prevailed on the government and its decision to barter away the life and livelihood of crores of farmers, workers, and small businesses, has been averted.

“AIKSCC sincerely hopes that this Government will not try any back-door method of sabotaging the interest of Indian farmers and farm-workers through trade deals,” it said in a statement. NitinKunkoleinker, President, MAIT said the decision is “a very encouraging step” for Indian manufacturing, especially the IT and electronics manufacturing sector, as it reiterates the government’s strong support to the industry’s growth.