The 20-trillion stimulus package of the State Bank of India is likely to more than double the country’s fiscal deficit and will take up to 7.9 percent in this financial year, according to a research report by the State Bank of India (SBI), which was earlier . The fiscal deficit is estimated at 3.5 percent of this fiscal gross domestic product (GDP).

“After taking into account these measures, as well as past and recent excise duty increases and the cash outflow of DA [dearness allowance] freeze (equivalent to about 0.8 percent of GDP), we now have our baseline fiscal deficit (excluding excess) The report states that budgetary resources (EBR) account for 7.9 percent of the revised GDP at 7.9 percent, which is low revenue and the backdrop of the COVID-19 epidemic. Due to high expenditure against Egypt.

Based on the Central Statistical Office’s earlier estimates of GDP, the baseline fiscal deficit is about 7.1 percent of GDP.

“We estimate a 4.5% direct impact on the fiscal deficit purely due to revenue reduction / automatic fiscal stability and a 0.9 percent indirect effect due to GDP changes”, the Indian media quoted Ecoprap said.

The SBI document states that the cumulative real fiscal impact is about 1.14 trillion or 0.6 percent of GDP.

It states that there have been studies that suggest that if the difference between the interest rate and nominal growth rate is negative, there is no level of debt that is volatile, i.e. the government can borrow easily. Only if the difference becomes positive, then the question about maximum permanent debt exists. 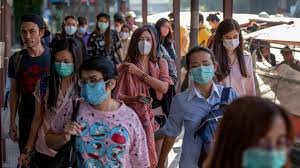 Demand for sanitizers,masks at a fever pitch.