GST was not the cause of the current slowdown-Revenue Secy Ajay Pandey. 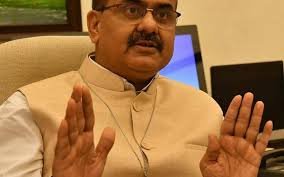 Pandey strongly refuted criticism that the goods and services tax was the cause of the current economic slowdown, saying it was a winwin for everyone, with the incidence of taxation coming down on every commodity.

Revenue secretary Ajay Bhushan Pandey has said the government is well on track to meet its tax targets even after the significant cut in corporate tax rates and that any reduction in personal income tax would depend on impact of the measures taken on revenue and the budget.

He said an action plan by the committee on revenue mobilisation would be taken to the GST Council expeditiously.

“If GST had some inherent problem, then what explains the good revenue growth in the first two years of its existence? Also, in first two years of GST in the beginning even, tax rates were reduced. Reduction in overall tax rates was to the tune of Rs 1 lakh crore a year. So, therefore, to say that GST is the cause of the current slowdown, I don’t think is a fair statement,”.

BibekDebroy, chairman of the Economic Advisory Council to the Prime Minister, recently commented that GST had been one of the major reasons for the current economic slowdown.

The revenue secretary said businesses earlier had to comply with several taxes and several authorities. SHEIN suffering because of the BANN