Goyal blames structural adjustment for slowdown, says nothing to worry. 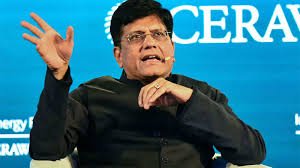 Piyush Goyal said the ongoing economic slowdown was periodic. Reiterating on the Indo-US trade relations, he claimed it is not disputatious. India clocked in a 5% growth in Q1 and most global institutions have scaled down growth forecasts.

Commerce and industry minister Piyush Goyal has described the ongoing economic slowdown as a structural adjustment, periodic in nature, and said that this was the right time to invest in the country before the growth momentum returns.

The economy grew 5% in Q1 and most global institutions have scaled down growth forecasts. “I think once the period starts getting better and better, we tend to loosen ourselves a little bit. We don’t care if we use a little bit extra energy, we don’t care if our productivity goes down a little bit,” Goyal said at the India Energy Forum. “Times are good, profits are welcome. And every few years there is a little bit of this structural adjustment,” he said.

Goyal said he is not unduly perturbed. “Of course, India being an economy with huge opportunity could well do without this kind of a slowdown,” he said, adding that the government is working to see how it can re-energise sectors.

The Indian Railways increased capex around 2.5 times during 2014-19, of what it did in the previous five years. Prime Minster NarendraModi has shared his vision of $700 billion investment for railways over the next 12 years, he said.

‘NO DISPUTES WITH US’

Referring to India’s trade relations with the US, Goyal said: “I don’t think we have any disputes, we have had some disagreements. We welcome a little bit of nokjhok (bantering). I think a little bit of uncertainty helps”. Talking about these differences he also said that a little uncertainty in any relation is also good for having healthy bilateral relations.

Referring to the withdrawal of the Generalized System of Preferences (GSP) by the US, Goyal said it could be a “dispute in the eyes of some, but I think it opened up an opportunity for me to have a dialogue with my colleague (US trade representative). We had some wonderful discussions.” USTER®QUALITY EXPERT: impressive throughout the mill Researchers recycle wool into smart textile that remembers its shape