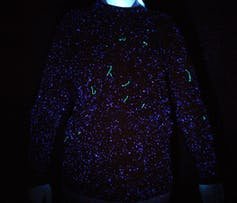 An individual can leave tiny little fibres behind from their clothes every time they move. They also pick up fabrics that other people have left behind. This movement of fibres is known as fibre transfer and forensic scientists can use this to solve crimes.

Textile fibres are one of the most important types of evidence in forensic science. They have been crucial in investigating some of the most infamous criminals in the UK – such as Joanna Yeates’ murders, Ipswich serial killings, Soham murders, and Coastal Path murders, to name a few.

Till date, it has been largely assumed that movement of fibre happens only when two surfaces meet. But we now know this is not necessarily the case. New research has found a new way of fibres transference called “contactless airborne transfer”. This is when fibres move from one garment to another without contact.

Even if two people don’t touch each other, but are in the same room, it is possible that fibres from person A’s clothing could transfer through the air, to person B’s clothing (and vice versa).

From an investigation ‘s viewpoint this means the fibres found on an individual may have been indirectly transported rather than through direct involvement in a crime under such circumstances.

To monitor the airborne movement of their fibres between garments in an experiment. One person wore a fluorescent fabric stood in one corner of an elevator and another one wore a non-fluorescent black top stood in the diagonally opposite corner, without touching each other for 10 minutes.

After the experiment, the receiver’s black top was photographed using UV imagery techniques to determine the amount of transferred fibres. The study findings revealed that not only can textile fibres easily move without physical interaction between fabrics, but they can do so in surprisingly large numbers.

Even the discovery of only a few fibres will be deemed important in a criminal case. Thus the movement of up to 66 fibres in a single experiment was considerably higher than expected.

But not all garments tested transferred fibres to the same extent. type of fibres the donor garment was constructed from and its ability to shed those fibres was key in contactless fibre transfer. The type of clothing worn by the recipient also impacted transfer, as did the movement of people and the opening or closing of the elevator doors.

But not all the garments tested transferred the same volume of fibres. Type of fibres from which the donor fabric was made and its ability to shed those fibres was crucial in the transfer of contactless fibre. The type of clothes worn by the receiver, movement of people and opening or closing of elevator doors, also affected transfer.

It is the duty of a forensic scientist to determine the value of the evidence, when forensic evidence is produced in court. For example, if an individual alleges to have been assaulted by the another in an elevator. If hundreds of the victim’s fibres are found on the suspects clothing, it’s highly unlikely that contactless transfer alone is the reason. But if only a few fibres are found, contactless transfer is possible.

The findings of the study can be used as a basis for the examination of fibres identified as part of the case and can also serve to enhance the reliability and authenticity of forensic evidence submitted in court. Export of Textiles and Apparels From indigo to green: Beyond Denim to display eco-conscious fabrics for Autumn / Winter 2020-21