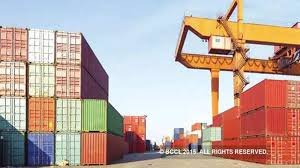 The drop in shipments of petroleum, engineering, leather, chemicals and gems & jewellery made India’s exports shrink to $26.03 billion. The trade deficit narrowed to a seven-month low of $10.86 billion from $14.95 billion a year earlier and $13.45 billion in August.

“The softening of commodity prices including crude, the US-China trade war, Brexit and developments in Iran, Turkey and other gulf nations further aggravated the problem of the world economy,” said Sharad Kumar Saraf, president of the Federation of Indian Export Organisations (FIEO).China’s exports dropped 8.5% last month while imports decreased 3.2% from a year earlier.

Saraf said all other major export sectors including almost all labourintensive segments were in the negative, showing a decelerating trend. “The uncertainty attached has also affected the flow of investment and added to currency volatility,” he said.

“While around two-thirds of the substantial $6 billion on-year decline in imports in September was explained by crude oil, precious metals and precious and semi-precious stones, the contraction in imports of items such as coal, chemicals, transport equipment, etc., provides a cautionary signal,” said AditiNayar, principal economist at ICRA. HOW TO BOOST EXPORTS OF TEXTILE SPARE PARTS & ACCESSORIES