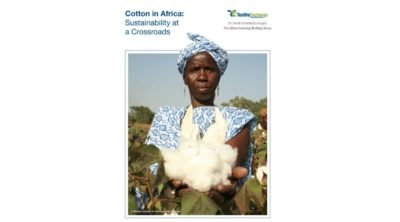 Lubbock, Texas – The rise in adoption of genetically modified cotton among some African nations is causing concerns about its environmental and economic ramifications, according to a new Textile Exchange white paper.

The paper, “Cotton in Africa: Sustainability at a Crossroads,” from the Pan-Africa Sourcing Working Group notes that seven of 54 countries in Africa now permit GM cotton production, four have prohibited or opted out and many others are in the consideration phase.

With demand growing for organic and GM-free cotton, the working group is urging policymakers in Africa to support preferred cotton production standards such as organic, Fairtrade and Cotton made in Africa, which prohibit genetic modifications. The white paper outlines the risks of scaling GM cotton in Africa as well as the opportunities of organic and GM-free preferred cotton standards.

The first use of GM cotton was in South Africa in 1997, followed by Burkina Faso in 2008 (which has since suspended its approval) and Eswatini and Sudan in 2012. In 2018, four countries – Nigeria, Ethiopia, Kenya and Malawi — approved usage of GM cotton. The four with opt out or prohibitions are Burkina Faso, Algeria, Egypt and Madagascar.

“With relatively little penetration of GM cotton, African countries have the opportunity to learn from other countries’ experiences of GM technology and weigh the pros and cons,” said Liesl Truscott, director of European and materials strategy and coordinator of the working group. “Demand for organic and other non-GM cotton continues to increase and, keeping in mind the genetic biodiversity and resilience that local seed varieties can offer, we hope this report creates food for thought for decision-makers at all levels.”

Africa accounted for about 4% of global organic cotton production in 2017-‘18, which was a 20 percent increase of 2016-’17. About 37,000 farmers in eight African countries grow organic cotton, led by Tanzania. Brands that source organic cotton from Africa include Cotonea, Mantis World and Mayamiko.

“Africa is at a crossroads,” said La Rhea Pepper, manager director of Textile Exchange. “It is key for governments, farmers and other stakeholders to recognize the importance of protecting the right of farmers to grow non-GM crops.” Cotton that is flame retardant and free of formaldehyde