EU-Singapore FTA to enter into force from Nov 21. 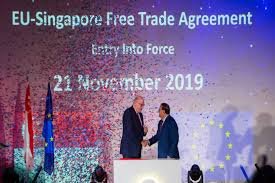 The council of the European Union (EU) has approved the EU-Singapore free trade agreement (FTA) that will remove almost all customs duties between both sides from November 21, Singaporean minister for trade relations S Iswaran and EU trade commissioner-designate Phil Hogan announced in Singapore recently.It is the first such agreement between the EU and a member state of the Association of Southeast Asian Nations (ASEAN), Iswaran said.

This is an excellent opportunity for companies on both sides, in particular small and medium enterprises (SMEs), Singaporean media reports quoted Iswaran as saying.

An FTA symposium was organised in Singapore last month to understand specific aspects of such trade agreements, he said.Enterprise Singapore has also set up a website where SMEs can access a tariff calculator that will tell them what their preferential margins are for particular products or markets based on Singapore’s 24 existing FTAs, he said.

The EU-Singapore FTA will allow 84 per cent of Singaporean exports to enter the EU duty-free, with the rest to follow in the next three to five years.It also contains strong rules on trade and sustainable development, including the protection of labour rights and the environment, Iswaran added.Hogan said a ‘European Green Deal’ will be a priority for the next European Commission, the executive arm of the EU, which will take office next month. Safely does it: textiles and processes Which countries are facing a crisis while dealing with a pandemic?