Designer Jigmat Norbu takes us through the evolution of Ladakhi textiles The northern region of Ladakh produces incredible woollen textiles that are unlike anything else in the country. Shaped by the region’s extreme weather conditions and the cultural norms prevalent here, these have ancient identification marks woven into them through patterns. The homegrown fabrics also come with attached with strange, local myths (did you know that the world will come an end if an angel called Duguma stops weaving on her loom?). Designer Jigmat Norbu of Jigmat Couture has led the charge in exploring and celebrating these, and has even founded a textile museum in Leh. Ahead, he talks about the traditional methods of production, design innovations and how these textiles are evolving in the current fashion scene. 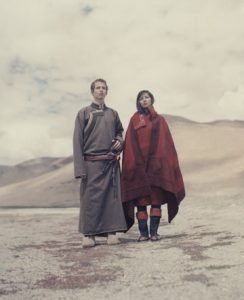 What are the origins of woven textiles in Ladakh?

It’s a common belief that Ladakhi weaving came from Tibet because the looms look similar. Ladakh and Tibet share common culture because the entire region was once a part of the same kingdom. But there’s no record of any of this; it is all oral history. By the time great explorers like Alexander Cunningham and Robert Shaw began passing through Ladakh in the 19th century, they found that weaving was already widespread here. Every household was spinning yarn, and every second house had a loom and was weaving their own cloth.

In the Changthang region, where life is still largely nomadic, weaving, warps and weft are all associated with fertility, mother and child. A woman reveals her regenerative abilities through her weaving; the making of the cloth is regarded as an expression of her reproductive nature. When it comes to men, weaving is considered as an expression of their procreative abilities. There are many such stories and myths. Everything is related to something in Ladakh and each motif has a deeper significance. Another story is about Duguma, who was the wife of a legendary king called Kesar. People believe that Duguma is an angel, her loom still exists somewhere and that she still weaves. It is said that she only weaves one row every year. Legend has it that when she finishes weaving, the world will come to an end.

What are the different types of textiles woven in Ladakh?

Nearly every item we use here is woven—from clothing to shoes, home textiles and even accessories for horses. The main woollen textile is Nambu (snam-bu), which is used largely for clothing. There are plenty of others too—spu-ruks is a 10cm thick, warm, woollen fabric with a brush-like texture on one side; chha-li is woven with yak hair (not wool) and used as a covering for blankets and rugs. Phug-shar and tsug-tul are strong, waterproof textiles that also make blankets and coverings, while tsug-gdan is the material used for carpets. Ta-gal and lu-gal help make saddle bags, and ma-gdan is a saddle rug placed on the horse. Phir-gyis is a strong bag for carrying for grains, which also has interesting design. Lastly, ray-bo is yak hair woven into fabric that nomadic people use to make their houses and tents. 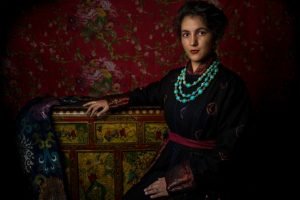 What is the cultural context of weaving in Ladakh?

There are three types of looms in Ladakh—thag-sha is the foot loom (common in central Leh), sked-thag is the backstrap loom (typically used by women), and the sa-thag is the loom used by nomadic men. In the Changthang region, the women weave and men are not allowed to touch those looms; they are only allowed to weave on their own. Conversely, in central Leh, women are not allowed to touch the loom of a man, so they do the spinning, carding and other processes. Typically, men weave hair that is used to make tents or blankets; it is a coarser fibre and may burn or cut the hands. Women weave wool into softer fabrics like Nambu for clothing.

Which factors determine the production process at Jigmat Couture?

At Jigmat Couture, we stick to traditional, age-old production practices. These are seasonal; it all starts in the summer when we begin collecting various fibres like pashmina goat wool, yak hair and sheep wool. Once the shearing is done, the wool is washed. The day after cleaning, it is carded. There are machines for carding these days, but we still do it by hand with a balchat—a piece of wood with a wire comb. Carding makes the fibre soft and fine.

After that comes the spinning. In Ladakh, we don’t do just spinning but also twisting for the coarser fibres. There are four or five varieties of spindles. Spinning wool is a women’s activity while twisting hair is done by men. Once spun, the weaving process begins either on the foot loom or the backstrap loom. The Ladakhi looms produce very narrow fabric; it is only 12 to 14 inches wide after washing. So they weave a 16m-long roll of fabric as opposed to bales of textile like the rest of India. Once the fabric is woven, we do napping, which is basically raising the fibre from the surface of the fabric. It is done to give texture and remove any leftover dirt. 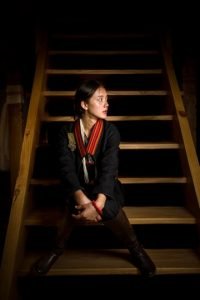 Are these textiles further embellished in any way? What can you tell us about the design aspect?

Unlike the rest of India, we don’t have a lot of embellishment on our textiles. Our fabrics have lots of texture and a very unique hand feel. With our terrain and sub-zero temperatures, it is very important that the fabric is practical. In the winter, when it drops to minus 20 or minus 30, Nambu is the only fabric that can keep us warm.

However, we do dye the textiles. Traditional tones were restricted to reds, maroons and browns, but I play with a variety of colours and natural dyes using wild rose, nettle, tree barks, walnut shells, marigold flowers, saffron and other herbs found in the mountains. We have also started dying the yarn to create interesting herringbone and houndstooth patterns in the fabric.

I also love innovating with raw materials. Traditionally, Nambu has always been woven with sheep or lamb wool. At Jigmat Couture, we’ve woven Nambu with yak wool and pashmina, which makes it a luxury product. I love breaking the rules and have even made a yarn out of donkey fur!

Our ancient nomadic tribes have used design for practical purposes too. Even now in the Changthang region, nomads trade wool and carry lots of saddle bags when trading. On the occasion that these bags get mixed up, they can easily identify which bag belong to which family through an identification mark called yuth. Yuth is a pattern of straight and dotted lines and various stitches woven into thicker textiles like the chha-li. Tribes read the yuth from right to left to identify which family’s mark has been woven into which cloth. Think of it as a bar code but from ancient times. 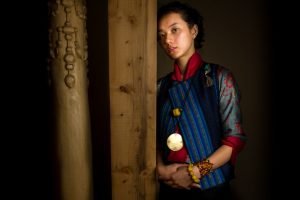 Tell us about your own work with Ladakhi textiles.

Jigmat Couture started as a couture line in 2010. Initially, we did bridal clothing but then due to demand from travellers who wanted to buy off the rack, we started a prêt store. Later, we started a fabric store called Raas Hatti—an affordable, one-stop-shop solution for all types of natural fabric. Once things settled, I started another category of wearable art, and there’s an exclusive, invite-only studio for these collector’s items.

I’m not from mainstream fashion so I don’t have seasonal collections like summer and winter. I do just one collection in a year and it has to have a strong connection to Ladakh and the Himalayas. I usually pick up one art or craft form of this region, study it extensively and then come up with a collection.

How and when did you start the textile museum?

It started with the idea of building a resource centre for the many interns and students who come here to study the region, costumes, lifestyle etc. However, our family had a piece of land in the city centre, as well as a lot of art inventory and antique pieces which were stored in trunks. So eventually we built a museum; it took almost five years to construct because it was done in a painstakingly traditional way. It was our way of giving back to society.

How have Ladakhi textiles evolved?

Our weaving culture used to be part of the household, but has now become somewhat industrialised. However, it is still a community-based model which is ideal for the mountains. Earlier, there was only a demand for pashmina wool that was exported to Kashmir, and sadly the lifestyle of the Changthang herders was very poor. Now we are using various kinds of wool and making the finished products ourselves. This has generated employment for young people as spinners, weavers, designers and salesmen.

From a design point of view, I’d say that a decade ago, there was a phase in Ladakh when workmanship was poor and traditional costumes were very average and boring. This has changed with innovation. Today, young people are proud to wear our costumes. I have a lot of local clients who want to flaunt them. Development of Powerloom Sector in the Country