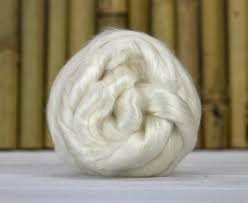 Like   agriculture , textiles have been a  fundamental part of human life since the dawn of civilization . Fragments  of cotton  articles dated  from 5000 BC  have been excavated  in Mexico and Pakistan . According to Chinese  tradition , the history  of silk  begins in the 27 th century BC . The oldest wool  textile , found  in Denmark  , dates from 1500 BC , and the oldest wool  carpet , from Siberia , from  500 BC . Fibres such as jute and coir have been cultivated since antiquity .

Natural fibres are   greatly elongated substances produced by plants and animals that can be spun into filaments , thread or rope . Woven , knitted , matted or bonded , they form fabrics that are essential to society .  Most people know natural fibres  provide natural ventilation . That is why a cotton  T – shirt  feels so comfortable on a hot day   – and why sweat –suits used for weight reduction are 100 % synthetic . Wool garments act as insulators  against both cold and heat – Bedouins wear thin wool to keep themselves cool . Coconut fibres used in mattresses have  natural resistance to fungus and mites . Hemp fibre has antibacterial properties , and  studies show that linen is the most hygienic  textile for hospital bed sheets .

Each  year , farmers harvest around 35 million tones of natural fibres from a wide range of plants and animals – from sheep , rabbits , goats , camels and alpacas , from cotton bolls , abaca  and sisal leaves and coconut husks , and from the stalks of jute , hemp , flax and  ramie plants . Those fibres form fabrics , ropes and twines that have been fundamental to society since the dawn of civilization . Cotton  dominates world  fibre production  , to other . speciality fibres such as cashmere  which , though produced in far smaller quantities , have particular properties that place them in the luxury textiles market.

Cashmere wool  , usually simply  known as cashmere , is a fibre obtained from the Cashmere goat .  The Cashmere goat is native to the Himalaya Mountain region of Kashmir ( then called Cashmere by the English) in India , Mongolia , and China . The word cashmere derives from an archaic spelling of Kashmir . Pashmina  is a cashmere fibre produced in parts of northern  India , Kashmir , Xin Jiang , Tibet , Mongolia and Pakistan .  Cashmere is sometimes mistaken for Shahtoosh , an illegal fibre harvested from slaughtered Tibetan chiru antelopes . The chiru is on the endangered species list . Cashmere  is also produced by a small goat raised in China, Nepal  and New Zealand . In parts of  China , northern India , Tibet , Iran and Afghanistan , the Tibetan  cashmere goat is reared as a domestic animal .

The fibre is also known as pashm ( Persian word for Wool ) or pashmina ( Persian /Urdu word driven from Pashm) for its use in the handmade shawls of Kashmir . The woolen shawls find written mention between  3 rd century  BC  and the 11 th  century AD  . However , the founder of the cashmere wool industry  is the traditionally held to be the 15 th century ruler of Kashmir , Zayn – ul – Abidin , who introduced  weavers from Turkestan.

The fibre is combed from the goat during the molting season ; the amount of good fibre averages about 4 gms per yield . The short fibres , 1-3.5 inches are fine and very soft and longer fibre 2-5 inches are coarse and stiff .  It  has an outer coat of long coarse  hair with an inner coat of down . This fine , soft down is the  source of the fibre that is known all over the world as cashmere .  The  fleece  of this goat has long ,straight , coarse  outer hair of little  value ; however  the small quantity  of underhair  , or down is made into  luxuriously soft woollike  yarns with a characterstic highly napped finish .Cashmere is collected during the spring moulting season  when the goats naturally shed their winter coat . In the  Northern Hemisphere  the goats moult over a period beginning as early as March and as late as May . This   fine cashmere    fibre is not sheared from the goat but is obtained by frequent combings  during the shedding season . The downy cashmere fibre is combed from the goat’s  fleece  during spring , and in the process is separated as much as possible from the  coarser hair . The imported cashmere was  spread  out on a large sieves and beaten with sticks to open the fibres and clear away the dirt . After opening the cashmere was washed and children removed the coarser  hair . The down was then carded and combed using the same methods used for worsted spinning .  It is estimated that on an average yearly production per goat is 150 gms .. The combined output from  30-40 goats provides enough fibre to make an overcoat .  The hair  usually is combed by hand from the animal during the molting season . In dehairing  , the coarse hair is separated from the fine fibres ( 15-18 microns) . The downy fine fibres make up only a small part of the fleece , usually about one-half pound per goat . The fibre is solid , with no medulla and with fine scales .

Like  other  hair  fibres , cashmere fibres are covered  with epidermal  scales  . There  are about  5-7 scales  per 100 micron  on average . They have serrated edges and project from the fibre causing an irregular surface . Cashmere  is used in high –quality apparel and is an expensive fibre as the yearly production is very small . Fabrics made of cashmere are warm , comfortable and light in weight and have beautiful draping characteristics .It has very similar properties  to those of wool but is more  sensitive to chemicals . The microscope reveals that cashmere is a much finer fibre than mohair or any wool fibre obtained from sheep . The scales are less  distinct and are  farther apart ; the fibre appears to be made  of sections placed within each other .

It is available in Gray , brown and white in colour . The  coloured fibres are full of tiny granules of pigment .  In cross-section  , the fibre is circular or slightly oval ; the pigment granules can be seen clearly in the cortical layer .  Wovens made out of cashmere  are  dry cleaned and knitted goods are hand washed . Cashmere wool fibres are extremely fine , averaging about  15 micron in diameter , which is considerably  finer than the best merino wool . The coarser beard hairs which are mixed with the true wool fibres are thicker , averaging about 60 micron  in diameter .

Cashmere  is used  100% or blended with wool  only .  Blends with nylon or tri blends with wool and nylon in woven patterns  is also found in textile industries. In  Ludhiana  nylon is blended with Cashmere  and used in hosiery  and some other knitted products.  Trial is also taken to use Cashmere  blended with acrylic fibre   to get the desired properties .

Fabrics are warm , buttery in hand , and have beautiful draping characteristics .  Cashmere is  chemically similar to wool . It wets out with water much quicker than wool , and is more sensitive  to the effect of chemicals , largely as a consequence of its greater fineness .

Cashmere  is very easily damaged by alkalies such as washing soda . It will dissolve  readily  in solutions of caustic soda .

Pure cashmere  can be dyed using acid dyes or metal complex dyes and spun into yarns and knits into jumpers .

Cashmere is  used in men ‘s and women’s  coats , jackets  and blazers , skirts , hosiery , sweaters ,  sports jackets , overcoats ,  gloves , scarves , mufflers ,  suits , loungewear  , blankets caps and robes . It is desirable because it is soft  ,  lighter in weight than wool , and quite warm ; however  , because it is a soft , delicate fibre  , fabrics produced from cashmere are not as durable as wool  . Sometimes , cashmere  is blended with less expensive sheep’s wool . When labels indicate a blend , no legal  problem exists  . However  , this is a fraudulent  practice when the label does not indicate that the product is a blend .

The world output of cashmere  wool is very small , and production is a costly process . Inevitably , the fibre is expensive . Cashmere is so  fine and soft , however , that it is regarded  as one of the most desirable textile fibres of all . Cashmere fabrics are warm and comfortable , and have a beautiful drape . The fibre is used very largely for making high –quality clothes , shawls and hosiery  , either alone or mixed with other fibres .Garments made entirely from  cashmere are properly labeled ‘ Pure Cashmere  ‘ / Sometimes , fabrics woven  from   fine botany wools are incorrectly described as ‘ cashmere ‘ . Cashmere wool is fine in texture , and it is also strong , light , and soft ; when it is made into garments , they are extremely warm to wear . Fabric and garment producers in Italy , Scotland , England and Japan have long been known as market leaders .

Cashgora  is a new fibre resulting from the breeding  of feral  cashmere goats  with Angora goats  in New Zealand  and Australia . Although  the International  Wool Textile Organisation  has adopted  cashgora  as a generic  fibre term , it is not recognized  around the world . The fibre is coarser than cashmere and not as lustrous . It is used primarily in less expensive coatings and suits .

In India few of the Worsted units like Raymond , Jayashree ,Digjam use Cashmere fibre in blends used in worsted spinning . Other worsted units are taking few trials and  they are planning to export cashmere fabrics  to the US and European markets . SEEING BEYOND THE PATTERNS WITH SHELTON VISION “This Women’s Day, treat your Queen with Elegance”