Abstract
Some substances, Dyestuffs or pigments or any chemicals appears homogenous, but are actually a combination of substances of different  mixtures of dyes, chemicals, or different compounds. In addition, the many dye are used in this dyestuff area is a mixture of different colored materials. In many instances, we can separate these materials by dissolving them in an appropriate liquid and allowing them to move through an absorbent matrix, like paper, liquid, Thin-Layer Chromatography (TLC), etc. Chromatography  is a method used in laboratory for separating organic and inorganic compounds so that they can be analyzed and studied. By analyzing a compound, a scientist can figure out what makes up that compound. Chromatography is a great physical method for observing mixtures and solvents.

Chromatography is a powerful separation tool that is used in all branches of science, and is often the only means of separating components from complex mixtures. The Russian botanist Mikhail Tswett coined the term chromatography in 1906. The first analytical use of chromatography was described by James and Martin in 1952, for the use of gas chromatography for the analysis of fatty acid mixtures.

Introduction Chromatography is a  aboratory technique for the separation of a mixture of color or pigments, chemicals. The mixture is dissolved in a fluid called the mobile phase, which carries it through a structure holding another material called the stationary phase. The various constituents of the mixture travel at different speeds, causing them to separate. The separation is based on differential partitioning between the mobile and stationary phases. Subtle differences in a compound’s partition coefficient result in differential retention on the stationary phase and thus affect the separation. (01)

Some of the colored substances dissolve in the solvent used better  than others, so they travel further up the paper. A pencil line is drawn, and spots of ink, pigment or dye are placed on it. Mixtures that are suitable for separation by chromatography include inks, dyes and coloring agents in textile material. As the paper absorbs the solvent, the different components of the dyestuff in the dyes react differently to it. These different spots of color will separate out, allowing you to see exactly what the components of the colors were. You can then use the spot to draw a picture to try to notice the different colored dyes that you identified in the chromatography. The colorant is a pigment or dye that gives its specific color. Whether black, blue, red, neon, yellow, pink or any other hue, the colorant is what you actually see when you look at a line made by a marker.

Chromatography may be preparative or analytical. The purpose of preparative chromatography is to separate the components of a mixture for later use, and is thus a form of purification. Analytical chromatography is done normally with smaller amounts of material and is for establishing the presence or measuring the relative proportions of analyses in a mixture. The two are not mutually exclusive. (02)

“Chromatography”; “chroma” from the  Greek word for “color”, combined with “graphy”, meaning writing or recording. (03)

The word chromatography means “color writing” which is a way that a chemist can test liquid or solid mixtures. While studying the coloring materials in plant life, a Russian botanist invented chromatography in 1903. His name was M.S. Tswett.

Chromatography technique developed substantially as a result of the work of Archer John Porter Martin and Richards Laurence during the 1940s and 1950s, for which they won the 1952 Nobel Prize in chemistry. (06) They established the principles and basic  techniques of partition chromatography, and their work encouraged the rapid development of several chromatographic methods Paper chromatology, Gas Chromatology, and what would become known as High Performance liquid chromatology. Since then, the technology has advanced rapidly. Researchers found that the main principles of Tswett’s chromatography could be applied in many different ways, resulting in the different varieties of chromatography described below. Advances are continually improving the technical performance of  chromatography, allowing the separation of increasingly similar molecules.(06)

The Retention factor, Rf, is defined as, Rf = distance the solute (D1) moves divided by the distance traveled by the solvent front (D2)

Where, D1 = distance that color traveled, measured from center of the band of color to the point where the color was applied The Different Types of Chromatography

It is used in the world to test water samples to look for pollution in lakes and rivers. It is used to analyze metal ions and organic compounds in solutions. Liquid chromatography uses liquids which may incorporate hydrophilic, insoluble molecules. Liquid chromatography (LC) is a separation technique in which the mobile phase is a liquid. It can be carried out either in a column or a plane. Present day liquid chromatography that generally utilizes very small packing particles and a relatively high pressure is referred to as High performance Liquid Chromatography (HPLC). 2. Gas Chromatography
It is used in airports to detect bombs and is used is forensics in many different ways. It is used to analyze fibers on a person’s body and also analyze blood found at a crime scene. In gas chromatography helium is used to move a gaseous mixture through a column of absorbent material.

Gas chromatography (GC), also sometimes known as gas-liquid chromatography, (GLC), is a separation technique in which the mobile phase is a gas. Gas chromatographic separation is always carried out in a column, which is typically “packed” or “capillary”. Packed columns are the routine work horses of gas chromatography, being cheaper and easier to use and often giving  dequate performance. Capillary columns generally give far superior resolution and although more expensive are becoming widely used, especially for complex mixtures. Both types of column are made from non-adsorbent and  chemical inert materials. Stainless steel and glass are the usual materials for packed columns and quartz or fused silica for capillary columns

3. Thin-layer Chromatography
The first developments in thin layer chromatography occurred in the 1940s, and techniques advanced rapidly in the 1950s after the introduction of relatively large plates and relatively stable materials for sorbent layers.(08)

It uses an absorbent material on flat glass or plastic plates. This is a simple and rapid method to check the purity of an organic compound. It is used to detect pesticide or insecticide residues in food. Thin-layer chromatography is also used in forensics to analyze the dye composition of fibers.

Thin-layer chromatography  (TLC) is a widely employed laboratory technique used to separate different biochemicals on the basis of their relative attractions to the stationary and mobile phases. It is similar to paper chromatography. However, instead of using a stationary phase of paper, it involves a stationary phase of a thin layer of adsorbent like silica gel, alumina, or cellulose on a flat, inert substrate. TLC is very versatile; multiple samples can be separated simultaneously on the same layer, making it very useful for screening applications such as testing drug levels and water purity and also using for dye compositions. (09)

Possibility of cross-contamination is low since each separation is performed on a new layer. Compared to paper, it has the advantage of faster runs, better separations, better quantitative analysis, and the choice between different adsorbents. For even better resolution and faster separation that utilizes less solvent, High-Performance TLC can be used. An older popular use had been to differentiate chromosomes by observing distance in gel (separation of was a separate step) It is one of the most common types of chromatography. It uses a strip of paper as the stationary phase. Capillary action is used to pull the solvents up through the paper and separate the solutes. Affinity chromatography Affinity chromatography is based on selective non-covalent interaction between an analytic and specific molecule [09]. It is very specific, but not very robust. It is often used in biochemistry in the purification of proteins bound to tags. These fusion proteins are labeled with compounds such as His-tag, biotins or antigens, which bind to the stationary phase specifically. After purification, some of these tags are usually removed and the pure protein is obtained.

Affinity chromatography often utilizes a biomolecule’s affinity for a metal (Zn, Cu, Fe, etc.). Columns are often manually prepared. Traditional affinity columns are used as a preparative step to flush out unwanted bio-molecules. However, HPLC techniques exist that  do utilize affinity chromatography properties. Immobilized Metal Affinity Chromatography (IMAC) is useful to separate aforementioned molecules based on the relative affinity for the metal (i.e. Dionex IMAC). Often these columns can be loaded with different metals to create a column with a targeted affinity.

Conclusion
Chromatography is an important biophysical technique that enables the separation, identification, and purification of the dyes components or pigments of a mixture for qualitative and quantitative analysis. Dyes or Dyestuffs can be purified based on characteristics such as size and shape of surface, and binding capacity with the stationary phase. Four separation techniques based on molecular characteristics and interaction type use mechanisms of ion exchange, surface adsorption, partition, and size exclusion. Other chromatography techniques are based on the stationary or mobile phase, thin layer and paper chromatography.

In addition, in this competition we justified the proper product compound and structure of the product. It should know us for the identification. Chromatography is used in many different ways. Some people use chromatography to find out what is in a solid or a liquid. It is also used to determine what unknown substances are. The Police, F.B.I., and other detectives use chromatography when trying to solve a crime. It is also used to determine the presence of cocaine in urine, alcohol in blood, PCB’s (polychlorinated biphenyls) in fish, and lead in water. 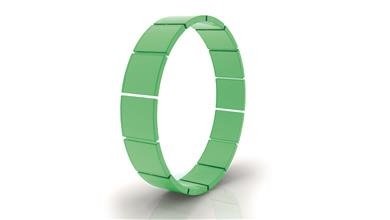