BJMC Jute Mill Demise Due to Non -Modernising Them by Authorities 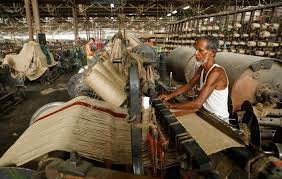 The government has closed all the state-owned jute mills without taking effective steps to contain the corruption and replace the outdated machines blamed for turning those into losing concerns amid an increasing demand for environment-friendly jute products across the world.

Economists, jute-sector insiders and governance campaigners said that the government closed the mills when the country’s jute and jute goods export witnessed a 8.10 per cent growth against the17 per cent fall in the overall export, in the recently concluded fiscal year, due to the COVID-19 pandemic at home and abroad.

The performance of jute, still known as the golden fibre, stood tall amid the fall of the earnings by readymade garment and leather exports as the jute sector exports fetched $882.35 million in 2019–20 in place of $816.27 million in 2018–19.

When the importance of and demand for jute products are increasing worldwide, the government has shut down all the Bangladesh Jute Mills Corporation units without modernising them, said Jahangirnagar University professor and economist Anu Muhammad.

‘It should be noted that corruption and mismanagement have turned the BJMC into a losing concern,’ he said.

private entrepreneurs would only benefit some quarters by letting them grab huge areas of land owned by those state-owned mills.

On July 2, the government closed all the 25 BJMC mills rendering about 50,000 workers jobless overnight amid the current COVID-19 crisis.

Jute minister Golam Dastgir Gazi blamed recurring losses for the government decision, but many asserted that workers should not be  held responsible for over Tk 10,000-crore losses since 1972.

Former caretaker government adviser and governance campaigner M Hafiz Uddin Khan put the blame on the failure of the successive governments in containing mismanagement and corruption in the corporation.

A huge number of skilled workers have been made scapegoats to hide the failure in installing modern machineries and in increasing productivity, he said.

Terming the BJMC as an institution mired in corruption, he stressed the need for a thorough audit of its performances and for bringing those responsible to justice.

He threw the question as to how the private sector jute mills were making profit.

Almost three-fifths of the country’s jute and jute goods exports come from the yarn manufactured by private mills while the BJMC did not have the ability to manufacture diverse jute goods.

But, beginning in the late fifties, the sector had flourished tremendously becoming the mainstay of the country’s revenue earning with fetching over 90 per cent of the whole Pakistan’s export income.

About 77 jute mills were taken over by the BJMC in accordance with the government’s nationalisation policy soon after the independence of the country.

In 1982, the denationalisation of the jute mills began with 10 factories being handed over to local owners.

Centre for Policy Dialogue research director Khandaker Golam Moazzem, too, blamed the mismanagement, corruption, lack of product diversification and outdated marketing policies and inefficiency on the part of the BJMC for its recurring losses.

The BJMC used to buy jute during the off-season time when the price went up, he said, adding that the corporation even bought low-quality jute at high prices, he said.

Besides, the cost of production spiralled as the BJMC administration became heavy with its mills running at less than half the capacity at which the private sector mills operated, added Moazzem, who carried out a comprehensive study on the country’s jute sector in 2008–09.

The BJMC never thought of going for diversifying its products despite growing demand for and widespread use of shopping and food-grade bags, composite and geo-textile products, pulp and paper, resented country’s top-ranking labour leaders, including Shahidullah Chowdury.

Exporting jute sticks for making charcoal and carbon fibre were expected to be a game changer for the jute sector while the natural fibre is preferred by the automobile industry, but the BJMC never wanted to go in that direction, too, they added.

Only photos of BJMC mills workers demonstrating for wages and arrears were frequent in the national dailies in last 20 years.

Rashedul said that his company, Creation Private Limited that was making diverse jute products, had never seen a negative growth since its inception 23 years ago and won export trophies in 2017, 2019 and 2020.

Jute was the country’s single most important export item until the 1980s when the place was taken over by apparel products, leather and frozen food.

Shahidullah Chowdhury, Trade Union Centre president and also Latif Bawani Jute Mill workers union’s former president, said that the process of closing down the BJMC mills began in 1993 during the first term of the BNP rule, led by Khaleda Zia, and was completed by the Awami League government, led by current Prime Minister Sheikh Hasina.

Referring to a 1993 agreement between the then Bangladesh Nationalist Party government and the World Bank, he said that it was a blue print to close down nine jute mills, handing over 17 mills to the private sector, and downsizing one mill.

In line with the 1993 agreement, the BNP government closed five mills sparking off a movement during which 17 workers were killed, he went on.

Returning to power in 2001, the BNP-led government closed down the world’s biggest jute mill in Bangladesh, Adamjee Jute Mill, on June 6, 2002 all of a sudden, like the present decision of the current AL government to lay off the 25 BJMC mills.

‘Actually, mills were closed when there were political or other crises,’ he said, adding that the current COVID-19 outbreak had already rendered millons of people jobless.

He further said that the government never appointed people who understood jute business for running the BJMC.

‘As a result, they never gave importance to modernising the mills, diversifying the products or exploring new markets, which we always cried for reviving the mills,’ he said.

However, he noted, the private sector mills have become competitive and grown while the BJMC mills were dying a slow death.

The government even did not pay heed to the SKOP proposal for spending only Tk 1,000 crore to modernise the mills and keep them running, he alleged.

Actually, the government did not want to run the mills, he said.