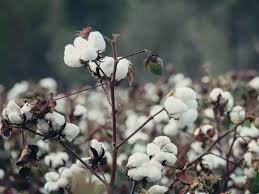 Cotton is the world’s most popular natural fiber. And while it can be grown ultra-sustainably using sunshine, rain, and a farmer’s green thumb, nowadays cotton is more industrial than natural. Most of it is farmed using pesticides and GMO seeds, and the industry can’t shake the perception that it’s bad for the planet.

In fact, a new report names cotton as a top contributor to biodiversity loss, while any recent trend piece on jeans or T-shirts mentions the fiber’s reputation as a water hog.

But a new initiative, the U.S. Cotton Trust Protocol, launched by industry groups, aims to put cotton back on the map as an eco-friendly fiber—and to set American cotton farmers apart from the rest of the sector. The $7 billion U.S. cotton industry is the world’s third largest and, according to the Trust Protocol, already on the cutting-edge of sustainability.

“We have a lot of farmers who want to prove what they do,” says Dr. Gary Adams, president of the Trust Protocol and the CEO of the National Cotton Council, a lobbying arm of the American cotton industry.

Matt Griggs is one of them. He’s a fifth-generation Tennessee grower and among the 300 or so farmers who participated in the Trust Protocol’s pilot program, which required Griggs to fill out a detailed questionnaire about his growing practices, from which a benchmark for improvements will be established. The results from the pilot will be published this fall.

Griggs says the Protocol gives American farmers a way to demonstrate what they’ve been doing (some of them for quite a while) to respect the environment. “We’re already head and shoulders above everybody else as far as taking care of our land and producing the highest quality crops with the least amount of inputs,” he says. It’s a pro-cotton perspective that environmentally minded consumers don’t often hear.

But the Protocol is launching at a time when sweeping, industry-driven sustainability claims are coming under increasing scrutiny. There’s a debate raging about all of the overblown data used in the sustainable fashion space, as well as the potentially ineffective role of other voluntary sustainability programs, like the Better Cotton Initiative, which some independent research seems to indicate has had limited environmental benefits.

Can the Trust Protocol learn from the mistakes of its predecessors to really drive environmental change, or is it just another program that serves to rebrand conventional agriculture as green?

There is no universally agreed-upon definition of sustainable cotton, but some of the overarching principles for growing it include reducing usage of non renewable resources like fuel and synthetic chemicals, conserving water, and protecting biodiversity and soil health. More recently, capturing carbon in the soil to help offset climate change has become a popular tenet of sustainable agriculture.

But, with the near-universal adoption of conventional agriculture (the term for farming with chemicals and GMO seeds), more sustainability initiatives have cropped up to meet farmers where they’re at.

There are exactly 68 cotton farmers in America who don’t use any synthetic chemicals (those are the U.S. certified organic growers). By aiming to add the bulk of the country’s 18,000 cotton farms to its roster, the Protocol hopes to drive more change.

“What we bring is scalability,” says Andy Jordan, an advisor to the Trust Protocol. “We want to touch every acre of cotton in the U.S. And we are providing data that is not available right now about goals we want to reach.’’

The data is the most crucial part of the initiative. As a much-discussed paper in Apparel Insider, published late last year, argues, “There is no data to substantiate claims that… one type of cotton is more sustainable than another.” Could the Protocol help fill in some much-needed detail?

It appears to be starting on solid footing. It aims to measure and facilitate U.S. cotton growers’ progress toward sustainability by collecting and publishing robust data at the farm level—and promises to vet the information using second and third-party verification.

It’s aiming to sign up half of American cotton growers by 2025. By joining, they agree to work toward goals on five sustainability metrics. Those goals are eye-poppingly ambitious, including slashing greenhouse gas emissions by 39%, soil loss by 50%, and water usage by 18%, all in five years.

Ambition is good, but this is where I worry the Protocol is already tipping into greenwashing. The group’s goals are set against historical benchmarks that claim that U.S. cotton farming has gotten dramatically greener over time, based on historical data compiled by Field to Market, another multi-stakeholder initiative working to drive sustainability in American farming, and the Protocol’s data partner.

Between 1980 and 2016, according to the Protocol and based on the Field to Market assessments, U.S. cotton farmers have already cut greenhouse gas emissions by 30% and energy usage by 38%, and reduced irrigated water usage by an impressive 82%.

But the Protocol is using an old trick, showcasing data only on a per bale or per unit of cotton measurement as opposed to a per acre or total impact metric. This is misleading because continued chemical usage, GMO seeds, and other technological developments have resulted in huge gains in yields for American growers since the eighties. And so, per-unit data ends up being a measure of resource efficiency rather than showing the true environmental impact that the American mass-farming system—in all its enormously productive glory—has on the land, the water, and the air. In short, productivity is not sustainability, otherwise we’d be living in a green Utopia by now.

Crispin Argento, a sustainable cotton expert at the Sourcery, a platform that connects sustainable cotton growers to buyers, says his concern is that sustainable cotton initiatives (and there are over a dozen now globally) all use different metrics and need to agree to a common set of standards to be effective. “We have had two decades of misleading information around sustainable cotton,” says Argento. “There exists a real opportunity for the sector to come clean and simply tell the truth.” Truth, he says, would mean reporting per-acre and total-impact metrics in addition to per-unit data as a starting point.

Thankfully, the 2016 Field to Market National Indicators Report does include per-acre and total-impact data for U.S. cotton. And this data paints a much different picture. While there have been dramatic gains in soil conservation (44% in total) and reductions in irrigated water usage (down 47% per acre) since 1980 (this is something the Protocol should run with, considering the stubborn consumer perception that all cotton is water thirsty), the per-acre data also shows these farmers have an uphill battle toward sustainability.

“While the change over the 36-year period is positive, the improvements have slowed in the most recent period for all indicators, and in fact reversed for Land Use and Soil Conservation,” the Report reads. Greenhouse gas emissions have declined a mere 2% in that time, it continues. In other words, U.S. conventional cotton growers are not on an inexorable ascent towards sustainability. In fact, improvements appear to have plateaued.

Now that the situation is more clearly defined, the question is whether the Protocol can help kickstart progress again. Matt Griggs gives me hope that it can.

As a U.S. cotton industry-led organization, the Protocol plans to promote and share nuanced stories from American growers like Griggs, who challenges our understanding of what sustainable cotton looks like, and whose farming methods incorporate both conventional and regenerative techniques. He actively works to use fewer chemicals, which he says is better for the land and his bottom line.

“We decided to stop farming out of a jug,” he says, referring to the plastic tubs synthetic fertilizers and pesticides are sold in. Over the past decade, Griggs has moved toward more organic practices, like crop rotation, which is better for the soil, and using cover crops and manure in place of gobs of synthetic fertilizers. “We look to a lot of the tools that the Good Lord has provided us with to manage the problems we’ve got.”

But how many American conventional cotton growers really think like Griggs? And can the Protocol create more of them? It’s hard to tell, because there’s no explicit mention of pesticides and fertilizers in the Protocol’s historical benchmarks or 2025 goals. This is discouraging, and perhaps unsurprising, considering the U.S.’s lack of leadership in this area. As of 2017, over 4 pounds of pesticides were used per acre of cotton in the U.S., according to Field to Market data, which would add up to more than 50 million pounds across America’s planned 13 million acres of cotton for this growing season. Even newer pesticides, less toxic and persistent than earlier varieties, have clear environmental, human health, and biodiversity drawbacks. They also require fossil fuels and energy to produce.

The Trust Protocol’s Andy Jordan and Gary Adams say that agrochemicals’ benefits and drawbacks are rolled into and reflected in the organization’s various metrics, like energy, greenhouse gasses, and land usage. Basically, farmers get points for using chemicals because they save crops, which saves resources like water and fuel, while points get deducted from biodiversity and water quality, which pesticides negatively impact. “We want to make sure to minimize the risk when it comes to pesticides, and maximize on opportunities for improvement,” says Jordan, candidly, but he adds that he thinks listing pounds of active ingredients in fertilizers and pesticides is “guaranteed to be misused.”

The only problem with taking this approach is that biodiversity and water quality are not part of the goals set by the Protocol. Jordan says via email that it will be difficult to add goals in these two areas any time soon “because there is not a universally agreed-upon method for quantifying biodiversity and water quality.” By contrast, Better Cotton Initiative, is clear in its mission to reduce the impacts of pesticides (it’s number one of seven goals) and reports on farmers’ reductions in fertilizers and pesticide usage. So, for now, I worry that the Protocol’s yearly progress reports will continue to make it look like a chemically-intensive form of agriculture has a net positive impact on the planet.

I’m not trying to single out cotton or American cotton. I like cotton, and I believe farmers do what’s best for their land and their bottom line. And to a large extent, cotton’s bad rap isn’t exactly fair. “Cotton remains one of the best fibers for people and planet,” says Argento. I tend to agree. Recycled plastics shed microfibers, and Tencel and other so-called sustainable rayons are made using a grossly inefficient chemical process that wastes 70% of the tree. They also often come from endangered forests or from eucalyptus farms planted on recently deforested land. There is no reason why conventional cotton should stand on the sidelines while manmade fibers gobble up market share.

But the battle for conscious consumers is, in essence, a battle for perception. Conscious consumers, right now, have an over-simplistic view of the cotton industry and its ills; they’re also armed with misinformation. Argento believes that market share will move towards those cotton sustainability initiatives that are honest and open and have the best data, and “who don’t sugarcoat the truth.”

To those ends, I hope the Protocol considers publishing per-acre and total-impact data, sets similar targets for 2025, and adds pesticide and fertilizer reduction to its goals—or simply provides more detail about their usage to the public. The results of the pilot program that Griggs took part in will be announced in the fall, and I hope it shows that the Protocol is committed to moving the needle—not just by changing public perception of the American cotton farming industry—but by truly working to reduce its impact on the environment. Looking for a hottest look this Fall 2020?