My Culture is Not Your Aesthetic !!

Cultural appropriation has become a hot topic in recent years where celebrities, designers and  brands are taking on the codes of minority culture. Cultural appropriation is when people of one culture start using elements of another culture that’s not their own. It can be seen as a violation when these elements are merely used to make a media or fashion statement, or when they’re taken out of context, becoming offensive – for example, when an item of clothing that has deep meaning to a culture is used as a fashion accessory flippantly by someone else. It can also be considered misappropriation if the aspect, item or symbolism being used is felt to be the collective intellectual property of the culture from which it originates.

Cultural appropriation is not a new phenomenon, in fact, it is deeply linked with the history of colonization, imperialism, and white supremacy. Shand (2002) suggests that “the first process of modern cultural heritage appropriation could be highlighted by both the ages of Enlightenment and Empire.” According to him, during the ages, first European, then American intellectual, economic and cultural requirements are highly appreciated as the models of all the world. These colonial powers not only extracted natural resources, but also cultural trophy. The colonists used the cultural heritage of indigenous people by robbing, stealing, trading and exchanging, including the artifact designs, body painting and the people themselves. These applications appeared in different occasions, involving different social status. These cultural images were first studied, and then created a trend of appreciating, yet ended up with abandoning. The display consequently made these cultural items available for appropriation.

The world over, calls are being made for fashion designers to be mindful when borrowing from other cultures and to offer products that are respectful of their traditions. While the term “cultural appropriation” is shrouded in uncertainty, there is undoubtedly a role for intellectual property (IP) in curbing this harmful practice.

Sample, borrow, inspire: These are the concepts are at the heart of creativity. Artists from all the walks of creative life build their oeuvre off what has come before them, the world around them and the cultures that stir their intellects. But lately a rash of outrage has bubbled up in a number of different minority cultures who feel that their heritage and traditions are being usurped by dominant cultured to such a degree that it has become exploitative. In particular, these minorities have turned to social media platforms to raise the alarm when they see a brand, magazine, or celebrity falling into the trap of appropriation instead of appreciation of their culture.

Some might say that the more different cultures mix together – so that traditional dress, hairstyle, music ore mannerisms become blended – the better it is. That is the best way for people from different backgrounds to feel connected to each other through combining cultures with an across-the-board celebration and integration of traditional clothes.

So when does it stop becoming cultural appreciation and slide into appropriation?

It’s perfect to describe the line between appropriation and appreciation, or perhaps misappreciation, as a line in the sand because it doesn’t stand still. It shifts with time and space. In the sense that culture  itself is very fluid and it is constantly shifting.

Cultural exchange is also very different from assimilation. ‘Assimilation’ describes what happens when minority cultures are forced to adopt features from a dominant culture in order to fit in. This is different from appropriation, because it’s done to ensure survival and to avoid discrimination.

Desi fashion is being overridden by an overpowering and unapologetic community of people who believe they can and should be able to adapt fashions from other cultures.

South Asian fashion has been readily worn by “white” Caucasian women and men as mere accessories to accentuate their outfits. Desi fashion is being branded as ‘festival wear’, which is often spotted at famous events like Coachella with the increasing popularity of music festivals. With the rise of social media, knowledge and access to different kinds of jewellery, garments, colours, textures and embellishments generally worn by people belonging to South Asian culture and subcultures, that defines Desi fashion, is available on a global front. Certain aspects of Desi fashion which would usually be seen on South Asian immigrants in the far West are being adorned by popular celebs like the Kardashians, Paris Hilton, Vanessa Hudgens and the like. 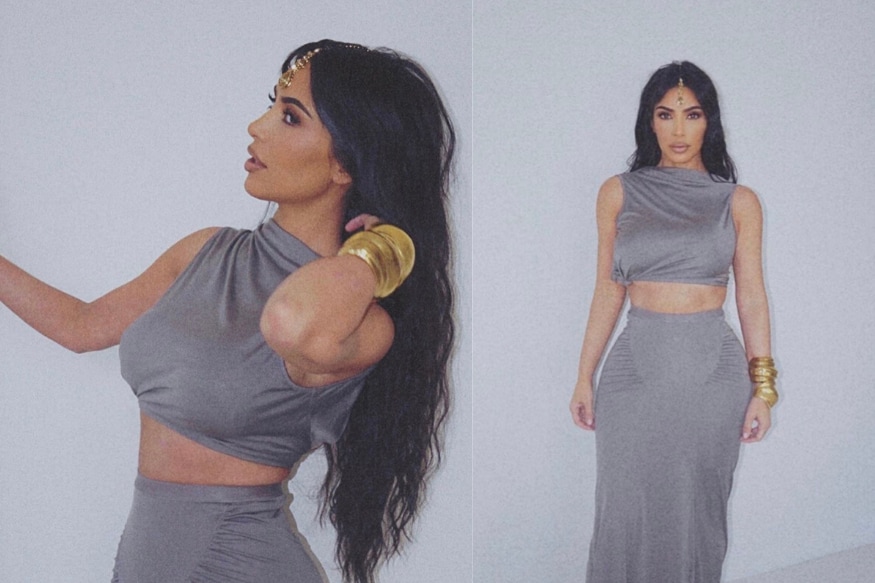 Everything Kim Kardashian West does is news. But the icon, who now boasts 170 million followers on Instagram, is also known for cultural appropriation. Kardashian West has been called out for wearing her hair in cornrows and for attempting to trademark the Japanese word “kimono.” She recently posted Instagram pictures wearing a maang tikka – a traditional South Asian head ornament that rests on the forehead. She had previously shared a photo of herself wearing a maang tikka to church in 2019.

She’s not the first Western celebrity to wear South Asian dress and accessories. No Doubt lead singer Gwen Stefani almost single-handedly popularized the bindi when she incorporated it into her look in the 1990s – she liked how it looked on her then boyfriend and fellow No Doubt members Tony Kanal mother, who is Indian. 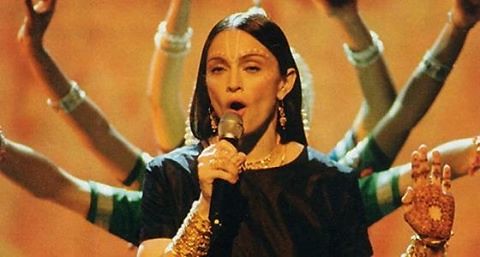 At the 1998 MTV Video Music Awards, Madonna performed her song “Shanti/Ashtangi” adorned with the Vaishnava tilak – a forehead marking usually reserved for devotees of Lord Vishnu – against the backdrop of Hindu gods. Iggy Azalea shot the video for her 2013 song “Bounce”  in India, twerking in front of a sadhu while dressed in a purple sari. In another scene, Azalea rides an elephant while wearing a dramatic golden mukut (crown). In another, she wears a white sari as children spray her with holi colors.

Beyoncé played a Bollywood star named Rani in a video for the 2016 Coldplay song “Hymn for the Weekend” dressed in a bridal outfit complete with henna and a ghunghat.

Fashion label Gucci faced a backlash from the Sikh community earlier  when it sent white (non-Sikh) models down the runway wearing turbans. The Sikh turban is a sacred article of faith, not a mere fashion accessory.

Adorning traditional ensembles if you have brown skin is pitied and considered “backwards” but if a white person or a famous celebrity is seen in Desi attire, they are positioned as stunning.

Normalizing these actions from major and even minor companies, celebs and people, in general, will only allow cultural appropriation to manifest, especially since people of colour do not get adequate representation.

There’s nothing wrong with paying homage to a culture you admire, but true appreciation entails some level of understanding and respect.