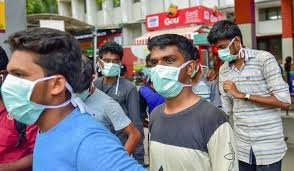 The adverse impact of Covid-19 on India’s apparel and textile industry is beginning to show in Bengaluru, the country’s largest textile manufacturing hub that employs about 2.5 lakh workers. Many of the highly employment-intensive clothing units in and around the city are either shutting down their operations or laying off employees, even as Karnataka is limping back to normalcy from the Covid-induced lockdown.

On Saturday, about 1,200 workers of a factory unit in Srirangapatna affiliated to the largest apparel manufacturer and exporter, Gokaldas Exports, were laid off. The company has told the workers that they would be given a portion of the salary for the next two weeks. The garment workers’ union is predicting closure of the factory eventually. At least four clothing manufacturing units in Bengaluru, of Garden City Fashion, Sonal Garments, Texport Industries and Punith Creations, have shut their operations or laid off half their workforce in the last 2-3 weeks, according to the workers’ union and industry insiders. Many factories are expected to tread the same path.

Garment factories in Karnataka employ more than 4 lakh workers, mostly women, and the uncertainty and layoffs are likely to affect thousands of families who are dependent the industry for livelihood.

Some of the industry representatives ET spoke to said it might take at least six months for demand to pick up. Since a significant number of Indian clothing companies supply products to overseas customers, the factories resuming operations in full scale will largely depend on the market behaviour in Europe and the US.

“There are challenges primarily driven by end-user demand. Most of the stores abroad are just about reopening and it is very early to see how the demand will pick up. There is an apprehension that the economic crisis may push customers to be conservative. There could be more demand for low-value garments than high-value clothes,” said the CEO of a top cloth manufacturing company, who did not wish to be named.

Meanwhile, some companies are making adjustments to their product lines as they resume operations.

At Mandhana Industries in Peenya industrial area that employs about 1,000 workers, half the workforce is back at work. Like many other garment units, Mandhana too has temporarily switched to making PPEs that include facemask for top brands like Wildcraft, and full body suits. “We will resume operations in full scale when we get new orders from our customers overseas,” said general manager Rajashekhar Murthy M.

The company managed to export 20,000 pieces of clothes to Sweden and Spain during the lockdown, but export cost has now increased, Murthy said, as the pandemic has affected air and sea freight services as well, driving up tariffs. “Earlier, the cargo charges were 140 per kg, but it has doubled now. Also, our customers are asking for a 30% discount because of the falling demand across the globe. It is not viable,” he said.

The industry is hoping to get some visibility on the market in six months. “We cannot predict how soon the demand will grow. But, hopefully we will get an idea about the market revival in the next six months,” said Naseer Humayun, the honorary secretary (south) of the Clothing Manufacturers Association of India. A Method To Solve Waste Problem In The Fashion Industry