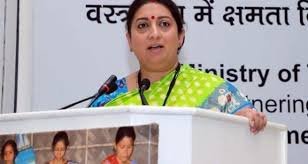 Eighteen States have agreed to partner with the Ministry under the scheme out of which Jammu & Kashmir and Odisha were not presentduring today’s function.  Initially, the Ministry has allocated over 3.5 lakh targets to the agencies nominated by State Governments to implement this scheme. After the training employment will be provided to all these beneficiaries in various textiles related activities. The programme covers the entire value chain of the textiles sector except spinning and weaving.

Speaking on the occasion, Union Minister of Textiles and Women and Child Development, SmritiZubinIrani, said that the signing of MoUs with State Governments shows the commitment of the Ministry to extend its support to the state agency and make them equal partners for building the spirit of national development to boost the textiles sector.

SmritiZubinIrani further said that the targets set out by some of the States like Tamil Nadu and Jharkhand are much below the requirement of skilled workers in textiles industry in those states and urged them to relook at the targets. She said that the Ministry will try to ensure that those who are not employed by the industry may get additional benefits provided by financial services under Mudra scheme. She said that the resolve to skill over 4 lakh people is a big step and every effort must be made to achieve it. The Minister said that she will be visiting the training facilities in different states to take stock of the situation.

SmritiZubinIrani also said that 75% of the workers engaged in the textiles sector and 70% of the beneficiaries of the Mudra loan are women. She further addedthat North Eastern States must focus on silk and jute sector and review the targets of skilling under Samarth scheme.

Secretary Textiles, Ravi Capoor, in his address said that India is a very small player in the global market and there is huge potential of employment generation in the textiles sector. Secretary Textiles informed that there is a gap of 16 lakh trained skilled workers in textiles industry. He further added that high standards have been set out in theSamarth scheme for the skilling of the workers so that they are readily employable by the industry. He said that the level of training has to be very good so that the objective of providing meaningful employment to the skilled workers is fulfilled.

The Ministry of Textiles, as part of the Government’s broad focus on skill development, implemented the flagship scheme (2010 to 2017) of skilling in textiles sector, Integrated Skill Development Scheme with a target to provide 15 lakh additional skilled workers to the textiles sector by 2017. Under the scheme 11.14 lakh persons were trained by March, 2018 and 8.41 lakh persons were provided placement.

With a view to leverage the institutional capability created by the Ministry and the synergy / collaboration achieved with the industry and the state governments, the Cabinet Committee on Economic Affairs gave its approval for a new skill development scheme, titled “Samarth” – Scheme for Capacity Building in Textile Sector (SCBTS)” from 2017-18 to 2019-20. It is a placement oriented programme for meeting the skill requirements of textiles industry. The scheme aims at skill development of 10 lakh youth upto 2020 in the entire value chain of textiles, excluding spinning and weaving in the organized sector, with a projected outlay of Rs. 1300 crore.