“Sometimes it is red,” said Tamanna Afrous, the school’s English teacher. “Or gray. Sometimes it is blue. It depends on the colors they are using in the factories.”- A teacher in Sarvar, Bangladesh, describing the effects of synthetic dyes on the local river[1]

For many, the impact of synthetic dyes on the environment is a distant issue, falling far behind daily concerns of air pollution or energy efficiency. But Sarvar, a town in Bangladesh that is home to numerous textile factories, is all too familiar with the dangers of synthetic dyes. Here, students in a school near a textile factory often faint or retch from the odors of the chemical dyes, while the river is polluted with the varying colors of the season. According to scientists, textile production is one of the most polluting of all industrial sectors, and is considered the second largest source of water pollution in the world after agriculture.[2] According to the World Bank, 17-20% of industrial water pollution comes from synthetic textile dyes, and about 40% of synthetic dyes contain known carcinogens.[3] In addition to harming human health, chemical dyes can accumulate in rivers, releasing toxic, hormone-disrupting chemicals that cause animal mutations and death.

Clearly, then, encouraging the use of natural dyes is necessary for the continued survival and health of our planet. But what are some of the benefits of natural dyes? Read on for Avani’s take.

“No synthetic dye has the luster, that under-glow of rich color, that delicious aromatic smell, that soft light and shadow that gives so much pleasure to the eye. These colors are alive” – Violetta Thurston[4] Minimal Environmental Impact: Unlike synthetic dyes, natural dyes, as the name suggests, come from entirely natural ingredients such as plants, roots, and insects. As such, they are completely biodegradable, and any wastewater created during textile production is nontoxic and safe for the environment.

Restoration of Biodiversity: Many of the plants used in natural dyeing have specific benefits for the local ecology. For instance, at Avani, the use of 2 dyes, indigo and eupatorium, further helps the environment by restoring biodiversity. Known by some farmers as “green manure”, indigo is known for its soil enriching properties, and indigo plants have the ability to increase the fertility of the fields in which they are planted, thereby restoring wastelands and improving biodiversity. Eupatorium, on the other hand, is a highly invasive weed. Through harvesting this plant for use as a natural dye, Avani creates financial incentives for local communities to manage this plant, thus improving biodiversity. Health Benefits: Many natural dyes are believed to have medicinal properties, making them beneficial not only for environmental health, but also for humans. For example, indigo is believed to have antibacterial, antifungal, and deodorizing properties. In the United States, Native American tribes such as the Cherokee and Osage used to use indigo plants to create medicinal eyewashes for infections, and teas to treat coughs and chest pains.[5] Another dye, Lac, which is used to make reds and purples, is also a known antibacterial, keeping clothing clean and fresh.

Vibrant, Rich Hues: Natural dyes produce far richer, more complex shades than their synthetic counterparts. In addition, contrary to popular belief, natural dyes tend to be more colorfast, and fade very little over time, instead developing a warm patina with age. Not convinced? Take a look at some of the pictures below, which showcase the stunning range of shades produced by natural dyes. Shades produced from Flame of the Forest 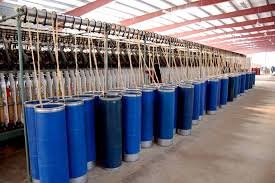