Eritrea
The State of Eritrea, is a country in the North East of Africa. The capital is Asmara. It is bordered by Sudan in the west, Ethiopia in the south, and Djibouti in the southeast. The east and northeast of the country have an extensive coastline on the Red Sea, directly across from Saudi Arabia and Yemen. The Dahlak Archipelago and several of the Hanish Islands are part of Eritrea. Its size is just under 118,000 km2 (45,560 sq mi) with an estimated population of 5 million.

It has been reported that the goal of Ethiopia is to produce a 30 billion dollar export revenue from apparel and textile annually by 2025. This shows that this country aims to leave behind many other top exporters including Bangladesh and Vietnam in just less than a decade. The sector stakeholders believe that this shows that how fashion designers in Ethiopia are dedicated and how Ethiopian fashion is a promising sign that the worldwide fashion industry is embracing at an exciting pace.
There are a number of factors that have shaped the competitiveness of the fashion industry. Amongst them, Ethiopian traditional dress, popularly known as Habesha kemis is the most beautifully designed and well-known dress for cultural holidays and events in Ethiopia and Eritrea.
Basically, there is a wide variety of traditional dresses that Ethiopians and Eritreans like to wear. The unique style of hand embroidery handwoven pattern on their dresses is what makes this Eritrean cultural dress and Ethiopian traditional dress entirely different from others.

The habesha kemis is the traditional clothing of women in Ethiopia. This ankle length, chiffon-made, snow white dress is usually worn at formal events.
It is often a long snow white dress decorated with embroidery and accompanied with a shawl called “netela”. It is a very thin and delicate scarf made from cotton and is rather large: about 160 x 260 cm or 63 x 102 inches. The embroidery done on the ends of the “netela” are usually decorated to match the dress it accompanies.
The “netela” is also used as a way to communicate what the wearer is feeling or doing. Normally, the “netela” covers the back and shoulders, with the embroidered end folded over the right shoulder.For mourning occasions, the “netela’s” embroidered end is wrapped around the face. When it comes to religious occasions or activities, the “netela” is wrapped over the back and shoulders and the embroidered end is folded over the right shoulder.
When the wearer is relaxing, the shawl is placed with the embroidered end over the left shoulder. Two shawls one for the head and one likewise for the shoulders can be used by the female wearing this Ethiopian traditional dress.Although, it is most often used, one should remember the “netela” is not the only form of wrap around for the Ethiopian female.
There are the “fota”, the “docho” and the “gabi”. The “fota” a sort of towel looking piece is brighter and usually checkered. Its size is about 147 x 268 cm or 58 x 105 inches. The “docho” is only worn by married women and is very long. The size of the “docho” is usually about 8 meters or 26 feet long.

The “gabi” is not really a scarf in the normal sense, but more like a light blanket. It is thicker and warmer than the “netela” and usually worn by men but women can use it at home to keep warm.

When donning their national costume Ethiopian men wear white knee length shirts, white trousers, a sweater, knee high socks and the wrap around “gabi”, which we elaborated on earlier.

This outfit is traditionally all white yet in some cases there is some nice embroidery work done on the front of the shirts and on the collars. The gabi can also have some embroidery on the ends but this is rare for the men folk.

Weaving
Hand-woven cotton garments also called shemma were traditionally worn by the Christian populations of the northern and central highlands of Ethiopia and the central and southern highlands of Eritrea. Today the hand-woven cotton garments are found nearly everywhere in both countries and are not only used for garments but also for household products like blankets, cushion covers and table covers.

The handloom weaving was established to meet household need and demand for clothing, and then gradually grew to be an additional source of income. The home-based traditional handcraft industry is pivotal for the cotton industry. In fact, the traditional hand-weavers are the major demanders of raw cotton, and are engaged in weaving and preparation of traditional fibres for the local and export market.
There was no imported textile sold in Ethiopia for a long time due to the high valued textiles of the local market. Today the weaving industry in Ethiopia is the most important non-agricultural source of income in the country particularly for rural families after agriculture. In both urban and rural areas, there are strong patterns of geographically clustered handloom activities. Each area of a city or a village has at least one weaver in residence. Weaving communities still exist in areas such as Shiro Meda or Gulele in Addis Abeba.

Ethiopian Cotton, Handspinning and Handweaving Tradition Continues
The story of Ethiopian cotton is part of a greater cotton saga that covers the globe and reaches back into ancient times. A strong and vibrant cotton industry still exists in Ethiopia today on large and small farms, both private and government owned, including artisan coops that create beautiful, luxurious textiles from cotton raised and processed on small farms. 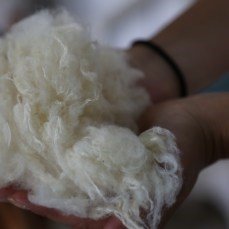 Dynamic History
Soft, fluffy, white cotton has been under production at lower elevations in rural areas of Ethiopia for millennia. The making of cotton cloth for traditional clothing has occupied both rural and urban artisans in a country that has long been the most important center for handmade cloth in Eastern Africa. This textile tradition has proven to be resilient, dynamic and adaptable to change. Current Ethiopian cotton production is the second highest in Africa and a high priority for a government that hopes to use the textile industry as a springboard to restart and sustain rapid economic growth. 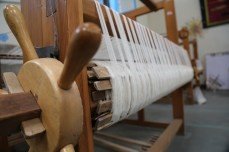 Culture of Cloth
Spinning was learned and practiced by most social classes in Ethiopia and was considered a fashionable and appropriate activity for noblewomen well into the 20th century. Clothing defined rank and status in this complex hierarchical society throughout Ethiopia’s history. Guilds of specialist weavers, embroiderers and tailors worked for religious and political elites. One of the most significant garments in Ethiopia’s cultural history is the white cotton shamma, a toga-like shawl worn by both men and women that was made in several types. A lightweight shawl worn by women over a kemis (dress) sometimes had a red border indicating rank and status. The shamma, made in two heavier weights, was worn by men, used as a blanket and even as shrouds for the dead. The manner of wearing the shamma could communicate mood, attitude and intention.

Tried and True Techniques
The tradition of preparing raw Ethiopian cotton has existed since antiquity and is still widely practiced. Ginning, bowing and spinning are the three processes involved. In the past cottonseeds were removed from the boll by tapping the cotton fiber spread out on a flat stone with a iron rod called a medamager. Bowing fluffed up the cotton for spinning by tapping the bow and sending vibrations through the bowstring creating clouds of fluffy cotton fiber. Drop spindles were used for spinning cotton and are still in use today along with spinning wheels. In rural areas, a traveler may find textile artisans using these older methods of production. The double treadle loom (sometimes a pit loom), used historically, continues to be the loom of choice today. Men were typically the weavers; they sat on the edge of the pit and operated the pedals, raising the heddles for efficient weaving.

Contemporary Artisans and Their Supporters
Sabahar is an Ethiopian company founded in 2004 that creates a variety of hand woven cotton and silk textiles. The company is founded on principles of innovation, sustainability and caring for each other. The weavers create exclusive designs for Creative Women, a woman-owned company that focuses on importing and marketing collections made in Africa that are sustainable, ethical and designed to bring artisanal traditions to those looking for natural textiles.