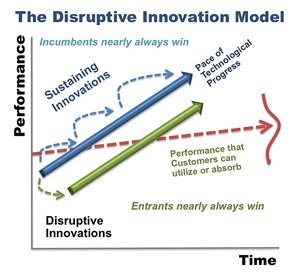 Today’s business world is extremely saturated. Pick any niche and you’ll see multiple companies fighting each other for dominance. When the markets are so competitive, a business needs to do something really unique to stand out. It needs to innovate, understand its potential customers, and cater to their wants even before they realise them; it needs to disrupt the market. And this sort of thinking isn’t anything new. Companies have been doing it for years without the fancy tag attached to it. They thought outside the box and they broke the rules; and in doing so, they created a unique and unassailable position for themselves in the market and in their customer’s lives.

A disruptive innovation is an innovation that creates a new market and value network and eventually disrupts an existing market and value network, displacing established market leading firms, products and alliances. The term was defined and phenomenon analyzed by Clayton M. Christensen and coworkers beginning in 1995. Since the early 2000s, “signiﬁcant societal impact” has also been viewed as an aspect of disruptive innovation.

Disruptive innovations tend to be produced by outsiders and entrepreneurs, rather than existing market-leading companies. The business environment of market leaders does not allow them to pursue disruptive innovations when they first arise, because they are not profitable enough at first and because their development can take scarce resources away from sustaining innovations (which are needed to compete against current competition). A disruptive process can take longer to develop than by the conventional approach and the risk associated to it is higher than the other more incremental or evolutionary forms of innovations, but once it is deployed in the market, it achieves a much faster penetration and higher degree of impact on the established markets.

What they have shown is that good firms are usually aware of the innovations, but their business environment does not allow them to pursue them when they first arise, because they are not profitable enough at first and because their development can take scarce resources away from that of sustaining innovations (which are needed to compete against current competition). In Christensen’s terms, a firm’s existing value networks place insufficient value on the disruptive innovation to allow its pursuit by that firm. Meanwhile, start-up firms inhabit different value networks, at least until the day that their disruptive innovation is able to invade the older value network. At that time, the established firm in that network can at best only fend off the market share attack with a me-too entry, for which survival (not thriving) is the only reward. The US apparel market is to a large extent a mass retail market. The major resellers are – with very few exceptions – in total control of the various sales channels and ‘brand spirit’ is not very relevant. In recent years US fashion firms set out along a path of total – or almost total – subcontracting of their design and production processes. Many of them simply surrendered control of their own brand and lost the means to differentiate themselves clearly from the competition. These companies are now aware of the problem and have recently started to backtrack fast, with a return to designing on home soil and manufacturing, if not at home, then at least in neighbouring countries such as Mexico. What’s important for these US apparel companies is to find a way of re-vitalizing their brand image. In Europe, fashion markets vary enormously from one country to another. In France and Italy, for example, fashion brands, especially luxury fashion brands, have never looked healthier. They’re benefiting from strong consumer demand in emerging countries, as they serve as a social marker for these populations. These days we see that, whatever the geographical market, the differentiator in most cases lies in the development and impact of the brand. So the business models have moved towards a focus on brand value.

Innovating in activities: From efficient to intelligent

One of the most dominant beliefs governing today’s big companies is that improving efficiency is the most reliable way to increase profits. Especially if market requirements change only gradually, companies have plenty of time to minimize the production costs of their existing products. Today, of course, constant efficiency improvements are a prerequisite for a healthy bottom line.

They may be necessary, but they’re not sufficient. In today’s rapidly changing markets, many products become obsolete before they have been “leaned out,” so managers get less time to optimize production processes fully. Companies are therefore building flexibility and embedded intelligence directly into the production process to help them adapt quickly to changing needs. Embedded intelligence can, over time, help companies to improve both the performance and the value-in-use of products and services and thus to improve their pricing. In essence, digitization is empowering businesses to go beyond efficiency, to create learning systems that work harder and smarter.

Disruptive innovations don’t catch on with mainstream customers until quality catches up to their standards.

Disruption theory differentiates disruptive innovations from what are called “sustaining innovations.” The latter make good products better in the eyes of an incumbent’s existing customers: the fifth blade in a razor, the clearer TV picture, better mobile phone reception. These improvements can be incremental advances or major breakthroughs, but they all enable firms to sell more products to their most profitable customers. Apple is the best and foremost example of disrupting the market and creating a new one while doing so. The company changed the way we listened to music with the iPod when the rest of the world was hooked on Sony’s Discman. They did the same for tablets with the iPad when everyone was clamouring for smartphones. By releasing niche products time and again, Apple established itself as the foremost brand in a market that they had created. And this was all because of Steve Jobs’ idea of innovation which revolved around his tenet: “A lot of times, people don’t know what they want until you show it to them.”

1. Disruption is a process.

Most every innovation—disruptive or not—begins life as a small-scale experiment. Disrupters tend to focus on getting the business model, rather than merely the product, just right. When they succeed, their movement from the fringe (the low end of the market or a new market) to the mainstream erodes first the incumbents’ market share and then their profitability. This process can take time, and incumbents can get quite creative in the defense of their established franchises. For example, more than 50 years after the first discount department store was opened, mainstream retail companies still operate their traditional department-store formats. Complete substitution, if it comes at all, may take decades, because the incremental profit from staying with the old model for one more year trumps proposals to write off the assets in one .

2. Some disruptive innovations succeed; some don’t.

A common mistake is to focus on the results achieved—to claim that a company is disruptive by virtue of its success. But success is not built into the definition of disruption: Not every disruptive path leads to a triumph, and not every triumphant newcomer follows a disruptive path.

If we call every business success a “disruption,” then companies that rise to the top in very different ways will be seen as sources of insight into a common strategy for succeeding. This creates a danger: Managers may mix and match behaviors that are very likely inconsistent with one another and thus unlikely to yield the hoped-for result. For example, both Uber and Apple’s iPhone owe their success to a platform-based model: Uber digitally connects riders with drivers; the iPhone connects app developers with phone users.

3. The mantra “Disrupt or be disrupted” can misguide us.

Incumbent companies do need to respond to disruption if it’s occurring, but they should not overreact by dismantling a still-profitable business. Instead, they should continue to strengthen relationships with core customers by investing in sustaining innovations. In addition, they can create a new division focused solely on the growth opportunities that arise from the disruption. Of course, as the disruptive stand-alone business grows, it may eventually steal customers from the core. But corporate leaders should not try to solve this problem before it is a problem.

Disruption theory does not, and never will, explain everything about innovation specifically or business success generally. Far too many other forces are in play, each of which will reward further study. Integrating them all into a comprehensive theory of business success is an ambitious goal, one we are unlikely to attain anytime soon.

*Disclaimer: The views and opinions expressed in this article are those of the author in his personal capacity of knowledge & perspectives on the mentioned subject .