Democratic Republic of the Congo, country located in central Africa. Officially known as the Democratic Republic of the Congo, the country has a 25-mile (40-km) coastline on the Atlantic Ocean but is otherwise landlocked. It is the second largest country on the continent; only Algeria is larger. The capital, Kinshasa, is located on the Congo River about 320 miles (515 km) from its mouth. The largest city in central Africa, it serves as the country’s official administrative, economic, and cultural centre. The country is often referred to by its acronym, the DRC, or called Congo (Kinshasa), with the capital added parenthetically, to distinguish it from the other Congo republic, which is officially called the Republic of the Congo and is often referred to as Congo (Brazzaville).

Congo gained independence from Belgium in 1960. From 1971 to 1997 the country was officially the Republic of Zaire, a change made by then ruler Gen. Mobutu Sese Seko to give the country what he thought was a more authentic African name. “Zaire” is a variation of a term meaning “great river” in local African languages; like the country’s current name, it refers to the Congo River, which drains a large basin that lies mostly in the republic. Unlike Zaire, however, the name Congo has origins in the colonial period, when Europeans identified the river with the kingdom of the Kongo people, who live near its mouth. Following the overthrow of Mobutu in 1997, the country’s name prior to 1971, the Democratic Republic of the Congo, was reinstated. Congo subsequently was plunged into a devastating civil war; the conflict officially ended in 2003, although fighting continued in the eastern part of the country.

Kuba textiles are unique in the Democratic Republic of the Congo, formerly Zaire, for their elaboration and complexity of design and surface decoration. Most textiles are a variation on rectangular or square pieces of woven palm leaf fiber enhanced by geometric designs executed in linear embroidery and other stitches, which are cut to form pile surfaces resembling velvet. Women are responsible for transforming raffia cloth into various forms of textiles, including ceremonial skirts, ‘velvet’ tribute cloths, headdresses and basketry.

In Kuba culture, men are responsible for raffia palm cultivation and the weaving of raffia cloth.[1] Several types of raffia cloth are produced for different purposes, the most common form of which is a plain woven cloth that is used as the foundation for decorated textile production. Men produce the cloth on inclined, single-heddle looms and then use it to make their clothing and to supply foundation cloth to female members of their clan section. The cloth is coarse when it is first cut from the loom, so it is then pounded in a mortar, which softens it and renders it ready for the application of surface decoration, for which women are responsible

Many prestige weavings are dyed with twool, a deep red substance obtained from the heartwood of the tropical trees Pterocarpus sp. and Baphia pubescens.[4] The Kuba believe that twool is imbued with magical and protective properties. When mixed with palm oil, it creates a pomade that is applied to the face, hair and body in a ritual context. According to oral tradition, the Pende were responsible for teaching the Kuba how to weave textiles; the Pende used twool to die their prestige clothes for death rituals

Early 20th Century ethnographer Emil Torday acquired the oldest group of extant textiles from the Kuba tradition from the reigning king, Kot aPe. He called these textiles “Bambala” after the ruling clan.[4] According to Joseph Cornet, these cloths were embroidered by Bushong women who were pregnant with the King’s heirs for use in rituals surrounding the birth of the children.[5] They were also used as funerary regalia for noble women. The slight sculptural relief, elaborate geometric designs and technical cohesiveness of the textiles indicate that they were created by highly skilled elders. According to art historian Vanessa Drake Moraga, “That Kuba embroiderers represented textile structures in their compositions underscores both the value of weaving to the culture and the prestige attached to women art.

Kuba women traditionally wore overskirts during burial displays, but the overskirt was later adopted as part of many ceremonial ensembles worn during ritual dances, celebrations and masked performances. The wraparound skirt was secured with a belt and worn over a typically monochrome red or white embroidered skirt. These skirts exhibit a variety of design components; some skirts employ flat linear embroidery exclusively, while others employ this technique exclusive on the borders of the fabric, in which case the interior is executed with cut-pile embroidery, which lends the surface a “plush” appearance and feel.[4] In the cut-pile embroidery technique, short raffia strands are individually inserted with a needle under one or more warps or wefts of a plain-woven raffia panel, then cut close to the surface at each end to produce the raised “pile.”[6] Textile weaving boasts a variety of motifs, such as guilloche interlace, which embroidery artists employed along with color, line and texture to yield varied compositions and visual effects.

Pattern and repetition: Kuba textiles as they relate to mathematics and music

Kuba textiles demonstrate a taste for interrupting the expected line; they compose through juxtapositions of sharply differing units and abrupt shifts of form. Mathematician Donald Crowe has analyzed, in particular, the two-dimensional designs of Benin, Yoruba and Kuba arts and has shown the extent of the Africans’ explorations into the formal possibilities of geometric variation.[7][8] In their art, the Kuba have developed all the geometric possibilities of repetitive variations of border patterns, and of the seventeen ways that a design can be repetitively varied on a surface, the Kuba have exploited twelve. This exploration does not mean that they confine themselves to repetitive patterning in confronting a surface to be decorated.

The character of Kuba design accords with Robert Thompson’s observation that some African music and art forms are enlivened by off-beat phrasing of accents, by breaking the expected continuum of surface, by staggering and suspending the pattern.[9] In textile design, the Africans of the Kasai-Sankuru region do not project a composition as an integrated repetition of elements. Until recently, Euro-American attitudes on this point were so fixed that they called a textile design a “repeat,” and expected to find a unit of identical imagery repeated over the surface. This kind of integration is not typical for African two-dimensional art.

The making of Kuba and Shoowa raffia cloth Reach out and touch. Isn’t that what we fiber folks do? We see something and our hands immediately reach out for the feel. That’s how I met artisan Emmanuel Kasongo. Well, okay–I met his handwoven raffia cloth first. Let me explain. I was drawn into his show booth by the kuba and shoowa cloth backdrop, the uniquely constructed handbags using this cloth along with conch shells and wooden beads as handles, and the assorted simpler raffia-style bags spilling on the floor. Then, out stepped Emmanuel, a tall, dark-skinned man with an engaging smile, wearing a mix of traditional-styled garb cut of raffia and other cloth. And then he touched me by his passion when talking about his current journey: “I have traveled the world and now I can assist the people in the villages around Molokai [in the D.R. Congo of Africa], where I was born, to help them in creating a sustainable future.”

From the Congo to Paris
When Emmanuel was four years old, his family left the Congo and moved to Paris. His schooling eventually brought him into the fashion world, assisting top designers such as Jean Paul Gaultier and Francois Girbaud. But after a decade of this work, his hands were itching to make things, his own things. And so, in 2000, he began designing clothing, handbags, and jewelry.  His contemporary handbag designs use raffia cloth, both old fragments and new, and are carried by ABC Carpet in New York.

Traveling back to his native land is no easy adventure. The roads and political climate make it hard to get in and out making it expensive to ship products. So Emmanuel doesn’t go there often, maybe once a year. But when he does, he spends his time helping the artisans with designs, which is where his creativity shines.

Making the Raffia Fabric
The twelve small villages around Molokai are all connected by bush and raffia palm. It’s the palm fiber that is used for making the raffia fabric, a process which involves both men and women. Women do the planting. Men strip the leaves of the plants which are then dried in the sun. Next, the men beat the fiber and further strip it into sections. Then they lightly spin it by rolling it across their thighs into a thread ready for weaving. But once the fabric comes off the loom, the women take over. The handwork of sewing the woven raffia into bags, clothing, fabric or embroidering designs onto the cloth is women’s work.

The size of each raffia panel is restricted by the length of the single fiber, usually about a yard square. This sturdy fabric is all used, from baskets for carrying just about anything, to the clothes on their backs, nothing goes to waste.

Kuba and Shoowa Cloth
In an area about 500-600 kilometers away from Molokai, but sharing the same river, the villagers create a different style of raffia cloth we call Kuba and Shoowa. (Kuba actually refers to the region of the D.R. Congo, formerly Zaire, where the raffia cloth stems from, and Shoowa is a tribal group who lives in this region and makes a specific style of cloth). Their designs are intricate, in bold earthy colors, and have had a variety of uses as a type of currency, as dowries, status symbols, and funerary shrouds. The Kuba and Shoowa cloths are pieced and embellished in various ways—appliquéd, cut-pile embroidered, patchworked, and/or resist-dyed. The Shoowa are masters of the cut-pile embroidery technique. It consists of passing threads between the warp and weft threads with a needle, without any visible stitches or knots. The threads are then trimmed, leaving a short cut velvet pile. 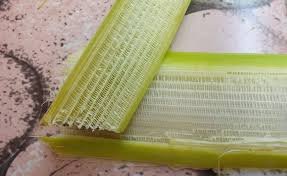