This project proposes the creation of a photosynthetic textile as a step towards limiting our adverse environmental contributions, and also provides an entry point for the public to speculate on the future of textiles. This can open up possibilities for alternative development and consumption processes by looking at materials as building blocks for the design process. It can create a textile which live and breathe so that when it worn on the body, its clean the air. This research gives the approach that how learn to take care of our clothes in ways that keep them alive so that they can fulfil their capacity for maximum use.

In order to create a biodegradable living textile capable of photosynthesis, the work consists of a series of interventions. It developed the first proof of concept for the survival of photosynthetic living cells in natural fabrics, such as various forms of cellulose and protein-based fibres, with the aid of a group of scientists at the University of British Columbia.

The biogarment project is planned to counter the dramatic rise in the effects of textile waste and air pollution on the environment. As a way to open up prospects for the future of fashion, the project uses the fields of synthetic biology and architecture. Biogarmentry also examines in our link to living things what place design should have.

With their eco-friendly approach and creative vision, there are goods that fully revolutionise the fashion industry. While the fashion industry has made gains in sustainable clothing production over the past few years, there is still a long way to go. Fortunately, a handful of designers are coming up with amazingly creative solutions to really change the eco-fashion notion. One such visionary is the Canadian-Iranian designer Roya Aghighi, whose latest clothing line, Biogarmentry, is made of algae that, through photosynthesis, transforms carbon dioxide into oxygen. The content would act to purify the air through photosynthesis, both completely compostable and, more importantly, while living. Since the life cycle of the living photosynthetic textile depends directly on how it is taken care of, while serving as a catalyst for behavioural improvement, the job questions our current relationship with clothing. In order to help the consumer, keep their biogarments alive, biogarments come with exclusive care instructions that promote a change in our current views of fashion and how we handle it. We create a more intimate relationship with our clothes by caring for them in this environment where clothes are dependent beings.

Ultimately, biogarmentry seeks to introduce a potential future for textiles by taking active approaches to change, and also examines the use of biology in design to inspire reflection and to promote new design roles and values.

Algae grows 10 times faster than terrestrial plants, and to generate an equivalent amount of biomass requires less than a tenth of the ground. It grows on land that is non-productive and non-arable, so it does not compete for land with other crops. It can be fertilized more effectively than land crops because it does not need fresh water, and prevent heavy water use, excessive fertilizer runoff, and downstream eutrophication associated with modern agriculture.

As a more sustainable alternative to fast fashion, Canadian-Iranian designer Roya Aghighi has created clothes made from algae that convert carbon dioxide into oxygen through photosynthesis. The clothes are the proof of concept for a textile made with living, photosynthetic cells, called Biogarmentry. The project has been shortlisted in the category of sustainable design for the Dezeen Awards. 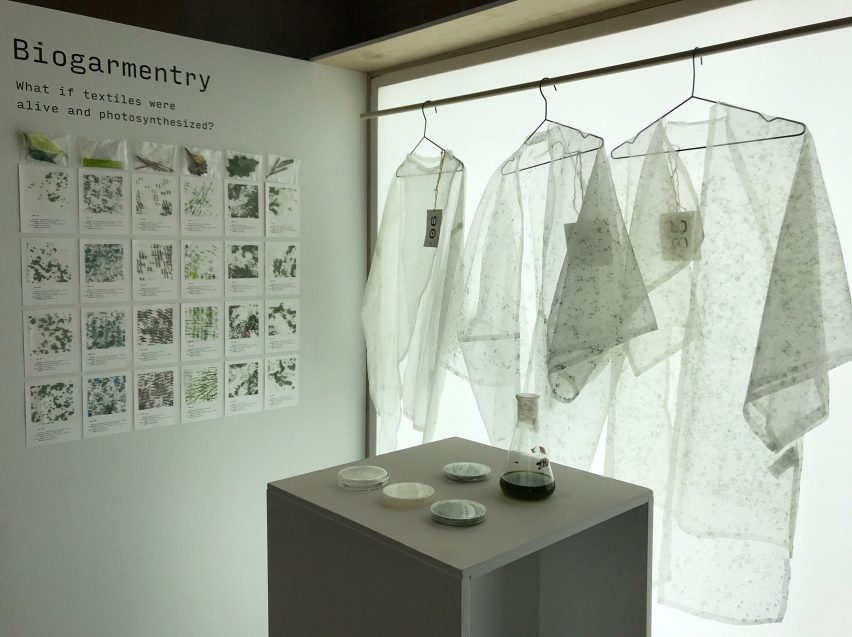 Aghighi’s biofabricated textiles, in a partnership between the University of British Colombia (UBC) and Emily Carr Univeristy, are living organisms that breathe by converting carbon dioxide into oxygen. Instead of tinkering at the margins, Biogarmentry proposes a complete redesign.

The living aspect of textiles will change the relationship between consumers and their clothes, changing collective behaviours to shape a sustainable future around our consumption-oriented habits. Chlamydomonas reinhardtii, a type of single-cell green algae, is spun together with nano polymers to create a fabric for biogarment. The result, which feels like linen, is the first non-woven living and photosynthetic textile to be made. In order to keep them alive, wearers will have to take care of their clothes as they would a plant, rather than engaging in the environmentally damaging tradition of produce synthetic clothes and after a few uses, discard them.

By being exposed to sunlight, biogarmentry is allowed. The owner will only need to spray them with water once a week instead of washing their clothes. Users can develop an emotional connexion to their garments by keeping textiles alive. “As the life cycle of the living photosynthetic textile depends directly on how it is taken care of, clothing care can regain ascendance as a critical component of the system.”

The clothing also improves the wearer’s immediate environment by turning carbon dioxide into oxygen, and worn en masse could help regulate carbon emissions. It could be disposed of through composting after the consumer is done with the garment. The textiles are currently expected to live for around a month, but if properly cared for, this duration may be extended.

Biogarmentry proposes a complete redesign. The living aspect of textiles will change the relationship of consumers with their clothing and move collective behaviors to shape a sustainable future around consumption-oriented habits. In addition to its sustainable design, the textile is also easy-to-maintained. Green algae contain chloroplasts containing chlorophyll, which offer a vivid green colour to them. The cell walls of green algae usually contain cellulose, and they store carbohydrate in the form of starch.

To keep it clean, the garments just need to be watered once in a while, just like real live plants. When the garment has reached the end of its life cycle, which, for the moment, is just a month, it can be used for composting.

A joint undertaking by the Advanced Materials and Process Engineering Laboratory and the Botany Lab at UBC was a feasibility study by Biogarmentry. Aghighi is currently a resident designer in the Netherlands at the Material Experience Lab. Ecologic Studio is using the power of photosynthesis with an algae-filled facade covering buildings that philtres air pollution.

Biofabrication designs include headphones made from fungus and packaging of food made from algae. In the sphere of sustainability and environmentalism, food packaging has become a priority. Walk down any store aisle or look at your own shopping cart, and you’re likely to see package after package made of plastic centred on petroleum. Biofabrication give the next direction to create an algae-based alternative to plastic, have chosen to address the problem.