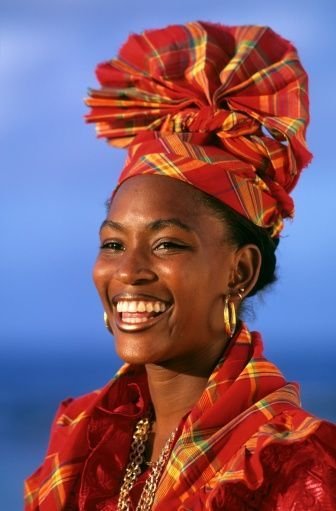 The headpiece is central to the Guadeloupe costume.

In Guadeloupe, “La Shat” headpiece was linked with the status of a married man’s mistress. A woman covered her head with the “vwèl o van” whenever she had to run errands. Tthe “kwatè” headpiece has given rise to many discussions. Some people believe that this headpiece was essentially reserved for women of bad reputation while others argue that women wore their “kwatè” to inform people that they were dating several men even though they were already in a relationship.

The fabric used in Guadeloupe’s national dress is Madras.

Madras originally comes from Madras (Chennai) in India. It was brought to Martinique over a century ago by Indian workers who emigrated to the Caribbean after the abolition of slavery. In India, madras was first made with banana tree fibers and then replaced by cotton and silk. The city of Rouen, in continental France, soon became the French capital of madras and still remains the center or madras production in France. Madras differ from other French-made fabrics with their structure of highly colorful squares and lines.

Madras is the basic fabric used for making traditional clothing : madras shirts for men, skirts, handkerchiefs, hats and dresses for women. Women’s madras clothes are often adorned with broderies and lace. Madras is also used in interior design : curtains, tablecloths and bedcloths can be made with madras to give a Caribbean feeling to a room.

The “tête maré“ headpiece was strongly influenced by Indian headpieces (a sign of dignity in India). For the Antillean, apart from being a way for black women to dodge the ban on wearing hats at that time, it also became a secret way to tell the relationship status of the wearer. It is still a common practice in the Antillean culture nowadays.