The Channel Islands are a group of British dependency islands in the English Channel, off the coast of France. The largest, Jersey, is known for beaches and cliff trails. Just outside the main town of St. Helier, the Jersey War Tunnels complex details the island’s WWII German occupation. Medieval Mont Orgueil Castle is on a hill on the east coast. Northwest is the island of Guernsey, with its capital, St. Peter Port. The Norman language predominated in the islands until the nineteenth century when increasing influence from English-speaking settlers and easier transport links led to Anglicisation. There are four main dialects/languages of Norman in the islands, Auregnais (Alderney, extinct in the late twentieth century), Dgèrnésiais (Guernsey), Jèrriais (Jersey), and Sercquiais (Sark, an offshoot of Jèrriais).

Victor Hugo spent many years in exile, first in Jersey, and then in Guernsey, where he finished Les Misérables. Guernsey is the setting of Hugo’s later novel Les Travailleurs de la Mer (Toilers of the Sea). A “Guernsey-man” also makes an appearance in chapter 91 of Herman Melville’s Moby-Dick.

The annual “Muratti”, the inter-island football match, is considered the sporting event of the year, although, due to broadcast coverage, it no longer attracts the crowds of spectators, traveling between the islands, that it did during the twentieth century.

Cricket is popular in the Channel Islands. The Jersey cricket team and the Guernsey cricket team are both associate members of the International Cricket Council. The teams have played each other in the inter-insular match since 1957. In 2001 and 2002, the Channel Islands entered a team into the MCCA Knockout Trophy, the one-day tournament of the minor counties of English and Welsh cricket.

Channel Island sportsmen and women compete in the Commonwealth Games for their respective islands and the islands have also been enthusiastic supporters of the Island Games. Shooting is a popular sport, in which islanders have won Commonwealth medals.

Guernsey’s traditional color for sporting and other purposes is green and Jersey’s is red. 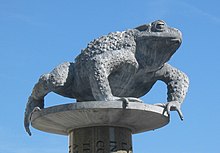 This statue of a crapaud (toad) in St Helier represents the traditional nickname for Jersey people.
Religion

Christianity was brought to the islands around the sixth century; according to tradition, Jersey was evangelized by St Helier, Guernsey by St Samson of Dol, and the smaller islands were occupied at various times by monastic communities representing strands of Celtic Christianity. At the Reformation, the previously Roman Catholic islands converted to Calvinism under the influence of an influx of French-language pamphlets published in Geneva. Anglicanism was imposed in the seventeenth century, but the Non-Conformist local tendency returned with strong adoption of Methodism. In the late twentieth century, a strong Roman Catholic presence re-emerged with the arrival of numerous Portuguese workers (both from mainland Portugal and the island of Madeira). Their numbers have been reinforced by recent migrants from Poland and elsewhere in Eastern Europe. Today, Evangelical churches have been established. Services are held in a number of languages.

According to 2015 statistics, 39% of the population was also non-religious.

Jersey fabric originated in the Channel Islands, where it was primarily used to make underwear and fishermen’s sweaters. Records indicate that jersey knits existed as early as the Middle Ages, and this knit gradually gained popularity throughout Western Europe during the Renaissance and Enlightenment periods.

The Channel Islands are a group of islands in the English Channel. These islands changed hands multiple times between the Middle Ages and today, and even though they are currently under the protection of the United Kingdom, they are not officially part of the UK.

Therefore, it is difficult to establish the exact heritage of jersey fabric, but fabric aficionados generally consider jersey to be British. What’s certain is that jersey fabric was named after the island of Jersey, which is the largest landmass in the Channel Islands.

As its influence around the world spread, England became a major textile exporter, and by the mid-1800s, jersey fabric had become well-known enough throughout Europe and the United States to become the default fabric for men’s sports uniforms. Until the 20th century, however, the popularity of jersey fabric remained limited, and it was mostly relegated to the realm of men’s underwear and athletic or work clothing.

Everything changed in 1916 when iconic fashion designer Coco Chanel made the bold move of including jersey fabric in classy garments. Despite its use in sports uniforms, jersey still suffered from an association with underwear, and using this fabric in normal garments was seen as relatively risque. Due to the overwhelming popularity of her designs, however, Chanel’s jersey garments became universally admired, and competing designers quickly adopted the jersey fabric trend she had started.

Coco Chanel’s use of a jersey in high fashion may have been the factor that originally made this fabric popular, but the jersey is no longer a common sight on the catwalk. Instead, this fabric has become ubiquitous as default material for run-of-the-mill, everyday garments.

Of course, a jersey is also a popular choice for athletic wear. While sports uniforms most commonly feature synthetic fibers these days, many athletic shirts, tank tops, and shorts feature jersey knits.

Applications of jersey fabric mainly remain limited to apparel, but one notable non-apparel example of a jersey fabric application is bedding. Due to its tight-knit softness, textile manufacturers commonly use jersey fabric to make bed sheets, pillowcases, and even blankets.

While a handful of artisans still produce traditional jersey fabric on the island of Jersey in the Channel Islands, gone are the days when these British protectorates produced the majority of the world’s jersey. These days, China is the overall largest textile producer, and this nation is also the largest exporter of both cotton and synthetic textiles.

Wool, however, remains a popular fabric material for jersey production, and the largest exporter of this natural animal textile is Australia. This Oceanian nation has more sheep per capita than any other nation, so it’s unsurprising that Australia is the world’s wool capital.

Jersey is a knit fabric used predominantly for clothing manufacture. It was originally made of wool but is now made of wool, cotton, and synthetic fibers. Since medieval times, Jersey, Channel Islands, where the material was first produced, had been an important exporter of knitted goods and the fabric in wool from Jersey became well known. The fabric can be a very stretchy single knitting, usually light-weight, a jersey with one flat side and one piled side. When made with a lightweight yarn, this is the fabric most often used to make T-shirts.

It can be a double knitted jersey, with less stretch, that creates a heavier fabric of two single jerseys knitted together to leave the two flat sides on the outsides of the fabric, with the piles in the middle. Interlock jersey is sometimes used as a more formal alternative knit to the traditional piqué knit for polo shirts and is generally the preferred knit for those made from Pima cotton. Jersey is considered to be an excellent fabric for draped garments, such as dresses, and women’s tops.

A guernsey, or gansey, is a seaman’s knitted woo

The guernsey is the mainstay of Guernsey’s knitting industry which can be dated back to the late 15th century when a royal grant was obtained to import wool from England and re-export knitted goods to Normandy and Spain. Peter Heylin described the manufacture and export of “waste-cotes” during the reign of Charles I. The first use of the name “guernsey” outside of the island is in the 1851 Oxford Dictionary, but the garment was in use in the bailiwick before that.

The guernsey came into being as a garment for fishermen who required a warm, hard wearing, yet comfortable item of clothing that would resist the sea spray. The hard twist given to the tightly packed wool fibers in the spinning process and the tightly knitted stitches produced a finish that would “turn water” and is capable of repelling rain and spray.

The guernsey was traditionally knitted by the fishermen’s wives and the pattern passed down from mother to daughter through the generations. While commercially available sweaters are machine knit, the final finishing of these machine-knit parts is completed by hand.

Through trade links established in the 17th century, the guernsey found favor with seafarers around the British Isles, and many coastal communities developed their own “ganseys” based on the original pattern. Whilst the classic guernsey pattern remained plain, the stitch patterns used became more complex the further north, the garment spread, with the most complex evolving in the Scottish fishing villages.

Mary Wright argues that the use and wearing of guernseys throughout the British Isles for over a century and a half almost justifies the guernsey for qualification as a national costume. A guernsey from the Folk Museum Guernsey was included in the 2010 BBC project A History of the World in 100 Objects.

Allen sweater, similar to a jersey, which originated in the Channel Island of the same name, sometimes known as a knit-frock in Cornwall, especially Polperro.