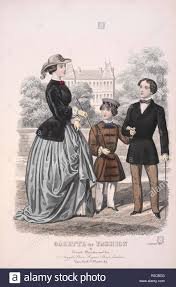 The universal satisfaction which the issuing of the uncolored plate with our work has given to our numerous read ,has been in  highest degree gratifying to us, and we have received the most flattering letters from influential houses, complimenting us upon the alteration in the character of our publication , and on the excellence of the execution of the engraving ,both as regards the artists and the printers. We have also been repeatedly thanked for the increased value given to the wor , by the introduction of the representations of styles of dress illustrating the prevailing fashion of this country, In lien frequently of rather exaggerated shapes, which although suitable to the French and continental tastes ,were inappropriate to the notions or wants of the customers of our principal houses.

The short blouse shown on the figure of a little boy is cut with plaits at back and in front ,and with a yoke or neck piece . It is fastened at the waist by a narrow belt of the same material as the blouse itself and a button and hole; or there are two holes worked ,so as to allow of either being used ,according to the size. The Sleeve is easy ,and plain at the hand .There is a frock collar with the end cut well forward on the bottom-edge.

London now Begine to be deserted by the fair votaries of fashion ; but in quitting it for the various watering places which they resort to at this reason of the year. They do not fail to take with them an ample provision of those pretty Negliges in which fashion at present robes her lovely worshipers. Our prints well show that we have not been negligent in procuring elegant modes for our subscribes . We shail now lay before them the intelligence we have gleaned during the best month.

Transparent bonnets continue as much in favour as ever .we may eite.as among the most elegant ,those of white crape lisses .Which are terminated on side by two smail lappet a narrow wreath composed of the most delicate roses ,either half  blown or in bud.

The gazette of fashion and The drama
“All common exhibition open lie,
To praise or censure from the common eye.”
The theatrical amusement of the present week have been unusally barren of interest. No novelty either in the way of performers or performances has been presented, with the single exception of the Soi – Disant tragedy of “Owen of pares or welch feuds,” which all the powerful acting of Mr .Kean, with the body of talent by which he was supported (for the piece had certainly the merit of being admirably cast) was unable to save from its material fate.

The duty which devolves upon us at the commencement of a new volume is most acceptable, for it affords as a feverable opportunity for addressing a few words to our subscribers and friends. Faithful to our promise ,we have published in our Gazette one of the most practical and scientific system of cutting ever published , Which we know is being successfully practiced by many able cutters who willingly testify to its value. We believe that the publication of the West End Gazette system has materially added to the value of our journal and has given it more the characters of a our journal ,and has given it more the character of a permanent work for guidance and reference. The advantages of a uniform system for cutting all styles of coats is evident to all practical cutters.

Our  Illusterations  of English Fashions are of the highest class ,and, as models for tailors ,are certainly unsurpassed. They are unique as being the only lithographed plates of Fashion produced in England by English artists ,and they are expressly designed and executed for this journal. With our remarks on the minute changes in fashion. We have endeavoured to combine instruction how to effect the necessary changes in cut or style when they seemed to require or admit of explanation.

Conclusion- The early 21st century witnessed a growing number of ethically inspired labels and websites, focusing on fashion’s impact on the planet and workers’ rights. Fashion has also grown as a subject of academic study. Fashion has not ended, it has changed. It is on the brink of another major shift. The Western fashion industry hasn’t died yet, but it will need to respond effectively to new global challenges.