Chad is a vast, diverse country made up of more than 180 ethnic groups that mainly don a traditional dress. Their religion, ethnicity, occupation are some factors that influence their day to day costumes. Many people are nomads or subsistence farmers and the largest groups are the Sara, who inhabit the subtropical regions to the south, and the Arabs, who are primarily Muslim.

The Arts and Humanities Support for the Arts. There is no government support for the arts, except if one considers the maintenance of the small Musée National as such. Some individual artists have galleries in N’Djamena.

Literature. The various ethnic cultures have their own traditions of oral literature, including narratives, epics, and ritual drama. Literary creativity of Chadians is notable in the diaspora community in France, but less so  in Chad itself, where market demand and the conditions for a literary culture are very limited. Languages of literary expression (in poetry, novels, memoirs, and theatre) are `French and, to a lesser extent, Arabic.

Graphic Arts. Various ethnic groups in the country have their distinct artistic traditions related to the decoration of houses, clothing, leatherwork, and artifacts. Modern graphic artists are few and are located in the capital of N’Djamena.

Performance Arts. Performance arts in theaters are virtually nonexistent; traditional religious and other rituals, however, are alive and well in both the south and the north, as part of the everyday cultural life of the Chadians. Not much is known about the remaining traditional material cultures of the various ethnic groups. 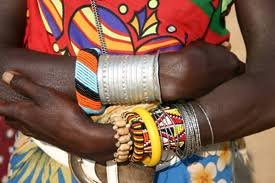 Because of their religious beliefs, Muslim women usually dress modestly in head-to-toe robes, although government regulations do not require them to do so.

However, for visitors to the country it can be important to keep this in mind. In southern Chad, which is inhabited by many non-Muslims, women wear wraps called rabott or pagne around their upper and lower halves, or in the case of married women, as an apron. They’ll add a short-sleeved shirt with an elaborately patterned neckline. A 5-meter-long scarf called a lafai can be wrapped around the body in many different ways, and women put them on when going to the market or for special occasions

Men in most areas of Chad continue to dress traditionally, according to their ethnic background, although men in urban areas might wear Western clothing, making it easier for visitors to fit in. Traditional Chadian Arab attire such as long robes called jalabiyas are worn by men in public, along with white turban-like headgear known as a tagiya. Muslim men wear outfits consisting of long robes with matching pants known as boubous, and in the southern tribes, they wear tunic outfits called complets.

Women frequently wear veils, regardless of religion. Muslim women veil themselves in public and Muslim men wear turbans and carry a dagger tucked into the sleeve. The average Chadian wears sandals made of anything from foam to plastic to leather, depending on the person’s wealth. Southern women accessorize with colorful head wraps. Women of the Sara tribe, which makes up about 30 percent of Chadians, formerly wore elaborate lip jewelry that stretched out the skin of the face.

Northern desert tribal women sometimes ink their lips using tree-thorn needles. Women of Southern Chad, such as those of the Sara tribe, usually braid their hair elaborately and visit their neighbors to braid and socialize. Other tribespeople will scar themselves with symbols representing their ethnic group, and women will go bare-breasted. Since famine is still prevalent in Chad, a sign of wealth is to be overweight, and when Chadians tell one another he has put on weight, it’s meant as a compliment, so don’t take it badly.

Since much of the population is subsistence farmers, clothing material is harvested cotton and animal fibers. As in many developing countries, dress styles indicate social stratification. The families of wealthy businesspeople and industrialists will wear more expensive attire to demonstrate how much they can afford, but no matter how wealthy a family is, both adults and children will keep their clothing clean and mended. Although the population of Chad is approximately 50 percent Muslim, no nationwide laws are restricting what people, including visitors, may wear in public, as there are in some other Muslim countries.