The Solomon Islands are a sovereign state consisting of six major islands and over 900 smaller islands in Oceania lying to the east of Papua New Guinea and northwest of Vanuatu and covering a land area of 28,400 square kilometres (11,000 sq mi). The country has a population of 652,858 and its capital, Honiara, is located on the island of Guadalcanal. The country takes its name from the Solomon Islands archipelago, which is a collection of Melanesian islands that also includes the North Solomon Islands (a part of Papua New Guinea), but excludes outlying islands, such as Rennell and Bellona, and the Santa Cruz Islands.

The islands have been settled since at least 30,000–28,800 BC, with later waves of migrants, notably the Lapita people, mixing and producing the modern indigenous Solomon Islanders population. In 1568, the Spanish navigator Álvaro de Mendaña was the first European to visit them, naming them the Islas Salomón. Mendaña returned decades later in 1595 and another Spanish expedition led by Portuguese navigator Pedro Fernandes de Queirós visited the Solomons in 1606. Britain defined its area of interest in the Solomon Islands archipelago in June 1893, when Captain Gibson R.N., of HMS Curacoa, declared the southern Solomon Islands a British protectorate. During World War II, the Solomon Islands campaign (1942–1945) saw fierce fighting between the United States, Commonwealth forces and the Empire of Japan, such as in the Battle of Guadalcanal.

Tapa cloth (or simply tapa) is a barkcloth made in the islands of the Pacific Ocean, primarily in Tonga, Samoa and Fiji, but as far afield as Niue, Cook Islands, Futuna, Solomon Islands, Java, New Zealand, Vanuatu, Papua New Guinea and Hawaii (where it is called kapa).

The very diverse island cultural groups that make up the Solomon Islands create different kinds of tapa, for different uses. In the Santa Cruz Islands it was made into men’s loincloths and head-dresses.

Tapa cloth was also used for trading between islands until the early 1900s, blue tapa cloth being a particularly valued commodity. The striking blue of the tapa comes from pau (wild indigo), which grows in tropical and subtropical areas of the Pacific. It is found from South America to Hawai’i, and in the Western Pacific region. Shell disk ornaments overlaid with filigree turtleshell are typical of the Solomon Islands. Commonly known as kapkaps, they were worn westward to New Ireland and on into the Papuan Gulf in PNG. Figure 1: Dala kapkap still worn as a head or breast ornament on Malaita and Guadalcanal. The intricate overlay design is cut by hand. All photographs courtesy of a private collection.

Large Tridacna clamshells and other shells are used as a base. Other round shell ornaments made from white egg cowry (Ovula ovum) are worn as forehead or leg decoration. Figure 2: Santa Cruz tema kapkap is a full-moon style breast ornament worn at dances. The overlay motif is usually said to represent the distinctive stark outline of a frigate bird, but other interpretations are an ancestor depicted with spine and ribs or a caterpillar that infects banana plants.

Diving frigate birds are important because they show fishermen where schools of bonito (tuna) are. Frigate birds and hornbills dating from about 3000 b.p. are shown in petroglyphs in the Poha Valley cave near Honiara. Figure 4: La’oniasi, one of a set of 10 breast ornaments traded down from the Kwaio people in the mountainous center of Malaita. The Kwaio have resisted contact with outsiders except to come out to weekly markets on the coast. They have retained their ancestral beliefs and did not convert to Christianity.

The Kwaio still grind the shell down on a stone. The design is cut with teeth or flint, then stained with black putty nut or ashes or dye from a tree berry. This one is incised with 2 frigate birds.

Other groups make similar kapkap jewelry. Sometimes a fish-headed sea spirit called Tararamanu from the Eastern Solomons is used. They are worn by women and given away at feasts.

Figure 5: Hair ornament comb with a diamond design representing the nut of the lengga tree.

The Kwaio still carve some palm wood combs using only a knife and the wing bone of a flying fox for tools. The wickerwork craft is called boré. Yellow is natural orchid vine, red dye comes from boiling vine in a bamboo container.

Another fiber ornament was a cane belt that is now outlawed. A warrior only wore one when he had been hired for a revenge killing. He couldn’t take the belt off until he had killed the victim.

Figure 6: Necklace of fine old reddish cut shell disks with a fragment of pearl shell, a dog tooth and a broken German porcelain “dog tooth”. The very thin disks on fine bush string give a soft feel to this strand. 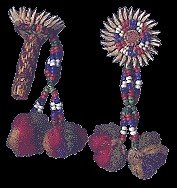 Porpoise teeth (about 300-400 teeth) were used along with dog teeth as part of bride price payments on Malaita and for burial ceremonies. The people in Lau Lagoon held porpoise drives to get teeth. Each porpoise has about 150 teeth. Different sizes were worth different amounts. It took ten large teeth to hire a big seagoing canoe.

Figure 9: Armband made with shell disks and porpoise teeth. This open-work style of jewelry is used for chest bandoliers for dances and shell vests for brides. Solid beadwork appears in belts and older, patterned armbands of fine cut shell beads. Body art in the form of tattoos and piercings is common. Scarification and cicatrice (raised tissue formed over scars) decoration were practiced but are now uncommon, except for shallow lines on faces. Tattoos are the most ornate and largest among the Polynesians. For instance, on Ontong Java, both sexes are tattooed in a blue-black colour, but women’s tattoos are the largest, stretching from their waists to just above the knees. Their tattoos consist of a fine pattern, usually of a fish motif joined head-to-tail and encircling the whole body, with a series of lines one above the other. They extend across the buttocks and into the pubic area.  On Rennell and Bellona, both men and women were also heavily tattooed, many of the patterns introduced from Tikopia several generations ago. The most common design was a broad vertical stripe and two similar oblique stripes, which look like an inverted arrowhead, and on either side there was a row of six or more fish figures. The chests and thighs and the arms were tattooed, and there were special designs for chiefs and their families.

In some areas, ears were pierced and the holes made quite pendulous, with large shell rings inserted. Nasal septum piercing was common among men, with wooden turtle shell and bone ornaments inserted. On Ontong Java, men wore an asanga, a turtle shell nose piece, and men and women on Malaita wore a similar ornamental nose-pendent called a farifari or komefari, or a nose pin called a usuusu or fio, both made from tridacna shell, and many other nose ornaments. Facial tattoos remain common among Solomon Islanders who were brought up in villages.