Core spun yarn is characterized by having a central core wrapped with staple fibres. These are produced in a single operation by simultaneously feeding a core filament and staple fibres through the delivery rollers of a spinning frame. 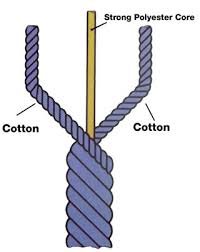 Core-spun yarns are two-component structure with Core and sheath.

The core is not twisted during this process. It is economical to produce coarse core-spun yarns through a rotor machine than the ring core-spun yarns.

Two or three ends twist together to make sewing thread. This twisting process improves the cotton covering of the core-spun yarn

Fibres and filaments used for the spinning core yarns have different characteristics. The yarn may shrink differently. So, to achieve balance and set of these yarns, heat setting has to be done.

Hot stretching is a process of heating the thread to a pre-determined and controlled temperature in the range of 180-240X. This helps to get improvement in dyeing and kink free sewing thread.