Since the coronavirus pandemic struck in March, Christian Dior on Tuesday was the first major fashion house to stage a conventional ready-to-wear runway show in Paris. Dior headlined the first day of a hybrid-style Paris Fashion Week.  Against the backdrop of the Eiffel Tower stood a massive DIOR-emblazoned white annex in the trendy Tuileries Gardens, hazy in the drizzling rain.Guests were exceptionally comfortable, with some fashion editors suggesting that it was because they did not have to fly in after a hectic week at Milan. Because of the virus, Italy

has limited travellers coming from Paris. Many of the Asian and American editors were absent at Dior, making it a mostly European affair this season.
Paris, like Milan, is seeking to kick off an uncommon fashion season for spring-summer 2021. The calendar spans nine days with around 16 in-person, ready-to – wear runway collections, with seated rows of masked guests, celebrities and editors; about 20 in-person presentations; and several hundred entirely virtual shows streamed with promotional videos online.
A dozen singers burst into rousing a cappella singing, led by a conductor, each behind a lectern circling the runway. The church was a clever theme because, in the sense of a fashion show, the congregation-style pews, sprawling by nature, allowed social distancing without it being awkward.
There was no religion in the flowing styles of spring-summer. Designer Maria Grazia Chiuri took a reinterpretation of the classic Bar Jacket houses, the staple of the New Look, as modelled for Japan in 1957, as its starting point. But the edition of Chiuris was loose and patterned and featured ethnic motifs, re-creating the ’70s boho mood.
The entire set pervaded the decade. The exuberance of that period was captured with patchwork on scarves, paisley designs, long flowing fluttery dresses, and sheer silk chiffon shirts. Silk scarves were worn like turbans, and Cleopatra-style eyeliner, long gold
flower pendants and twisted leather Roman sandals complemented the accessories and makeup.
The exuberance was overwhelming at times, such as when a multicoloured striped
poncho juxtaposed against a delicate floral silk shirt walked down the ramp.  But some long embroidered cape coats that hung down royally, more than made up for it, with silken patterned insides.

Last season, French wunderkind Marine Serre found new popularity for a variety of masked
looks that were labelled prophetic in her Paris ready-to – wear display in February.
This season, by showing her spring-summer 2021 designs through an atmospheric video called Amor Fati, or Love of Fate, Serre, one of
the best of a new generation of French designers, maintained her ingenuity and used the new, restricted digital platform to its fullest.
The clip features a nude model on a futuristic surgeon’s table, which fuses the line between fashion and art. Models in utilitarian black battle gear, with chains and visors, drive a tray
of instruments from surgeons to unnerving Hitchcockian music through a sanitised white room. It seemed to highlight advertising more than a showcase of  new designs, but it was slickly executed. 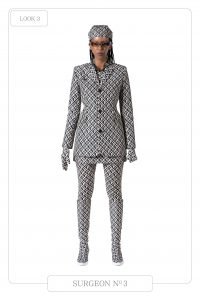