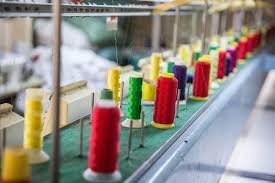 In August, basic textiles comprising fibres, spun and filament yarns shipment was up 2.9% YoY in terms of US$ worth US$483 million or INR3,577 crore, accounting for about 2.9% of total merchandise exported from India during the month. The increase was mainly led by sharp increase in fibre export, particularly cotton and at a very moderate pace by spun yarns.

On a cumulative basis, exports were still down 17% in the first five months of 2020-21, compared same period a year ago. The first two months were under strict lockdown and production suffered as a result. Globally, most markets were also under restrictions, hence orders were either cancelled or postponed.

Spun yarns shipment totaled 114 million kg worth US$289 million or INR2,140 crore. They were 19% higher than August 2019 in terms of volume and mere 2.5% up in terms of US$. Bangladesh was the largest market for spun yarns in August with value up 81%, followed by China (-4%). These two markets accounted for about 38% to total yarn shipment during the month.

Cotton yarn export was 94 million kg worth US$234 million (INR1,732 crore). These were shipped to 73 countries at an average price of US$2.49 a kg, up US cent 1 from previous month and US cents 53 down from a year ago. Bangladesh was the top cotton yarn market, followed by China, Portugal, Peru and Vietnam. A steady price maintain levels just above previous year.

All kinds of filament yarns shipment totaled 49 million kg, valued at US$65 million or INR485 crore. Nylon exports continued to show increases in August while viscose showed sharp decline (54%). Polyester filaments export was also down 41% during the month.

Cotton fibre shipment in August continued to surge with volume at 410 thousand bales worth INR682 crore or US$92 million. This takes the total export to 56.43 lakh bales worth US$1,443 million in the first 11 months of 2019-20 marketing season. Bangladesh was the largest market for Indian cotton export during the month, followed by Brazil and China.

Export price realisation averaged INR97.85 a kg or US cents 59.89 per pound during August. This was much lower compared to Cotlook A index, the global spot price benchmark and just below domestic spot price for benchmark Gujarat Shankar-6. During the month, Cotlook averaged US$70.41 per pound and Shankar-6 was at US cents 60.69 per pound, keeping Indian cotton competitive in global market.