Ravid Haken has been churning out crochet for quite some time. Based in Tel Aviv, the 33-year-old’s designs—which range from dresses to lingerie—come in sweet swirls of color, vary in texture, and are often decorated with tassels. There is always at least some sass woven into the silhouettes: In one image, Haken wears a dress with a scoop neck that ever so slightly slides off the shoulders while the bottom portion hangs like a loin cloth. In another, he has made a crochet sweater with wider loops on the arms that go with his matching crochet thong. (Some photos are a bit NSFW.)

Haken got into fashion when he was eight years old, after watching the movie Clueless. After seeing the film, he started matching his clothes and sketching. Haken started crocheting in 2013, after attending Shenkar College of Engineering and Design in Ramat Gan; it was his first time ever holding a crochet needle. “I love this technique first because of the ability to create and control the material. It’s like being a human 3D printer,” he says. “I sculpt a garment from yarn and needle. Also, crochet is ancient. There are ancient Egyptian crochet socks that are over 1,700 years old. The history, and her-story, of crochet is fabulous.” 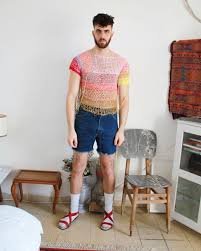 All of Haken’s designs are inherently sexy. Crochet has the ability to choose loop sizes, meaning that the classic technique can be morphed into something that has more of a saucy, peekaboo effect. The concept came to Haken, who is queer and of a Tunisian and Polish background, as a way to break out of a hyper-masculine mold, which has long dominated the Middle Eastern country. “Hyper masculinity is so common because of cultures merging, sometimes aggressively, and the fact that most citizens are obligated to serve the army,” says Haken. “I could sense that pressure of performing masculinity since kindergarten.” The result is intricate, meticulous designs, like a pair of pants that he created using crochet panels that took him more than 60 hours to make.

Crochet is not known for its sex appeal, but Haken has figured out how to make the technique his own. This is best seen in his underwear—he started making them in 2013—which are brazenly bare creations that reflect his window out of a machismo culture. In the mix are crochet panties in flamingo pink with feather and pearl adornments. He titled those “Crochet Wrestlers,” an homage to vintage homoerotic photography, where wrestling was “an excuse to show the nude male body,” says Haken. Another version, which he titles “Rococo Fever,” comes in Easter egg shades of blue and blush, with beaded tassels. While many of Haken’s inspirations are personal, he takes cues from another lingerie designer—well, it’s Rihanna herself. “I have always loved lingerie, and what RiRi did with it was so cool and revolutionary,” he says. “I had to do the queer me, the crochet version.”