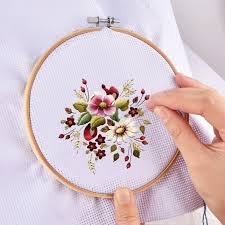 Hand embroidery is an art of enhancing and beautifying the cloth with the help of needle, threads, beads, and sequins creating an alluring design on the fabric. Traditionally the embroidery was done on household objects like table cloth, pillow covers, bedsheets, and on women dresses. Handwork embroidery is done cautiously using colored threads. In embroidery style, design, and motifs depend on the artisan’s creativity of using colorful threads and beading thereby giving an aesthetic look to the cloth.

Hand embroidery is broadly classified into 4-5 categories i.e. open work, counted thread work, outline work, and void work along with the colored work and regional specific embroidery form. Then traditional embroidery styles are mixed, cross, and combined together to create a spectacular design. 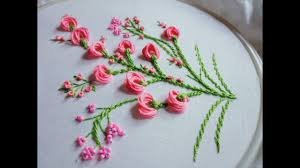 It is accounted for thread embroidery technique and a combination of whitework and counted thread work. This type of embroidery uses a red and black thread for filling the design and black for outlining. Assisi embroidery is done on Lenin and the background is filled with cross-stitch or regular cross stitch with the central image of the design is left empty. The outline of the design can be done using a backstitch or stem stitch.

Raised work embroidery is also known as Stumpwork and is originated in the mid-1600s in England. It is an embroidery technique in which stitched figures are raised from the surface to give a three-dimensional effect. In this type of embroidery pre-stitches pieces of embroidery, raised Stitches are used to create a realistic design including stylized scenic pictures, fauna, and flora. Threads used for this type of embroidery include wool, cotton, and Silk thread.

As the name suggests white work is the type of embroidery done using white thread on white fabric and is originated in India and China. This is also known as the French Laid Work and includes any type of other embroidery technique like Shadow work, fine white work, drawn thread work, etc. This embroidery style is used to decorate table linens, Church linens, Christening gowns, wedding veils, handkerchief, and delicate lingerie. It is very popular for its elegance and delightful appeal. Fabrics used for whitework are thin Muslin, cambric, and linen.

It is a traditional Spanish embroidery style. It is done with the black embroidery thread on a piece of white fabric. The aim of blackwork is to create fillings use within the designs. Originally the blackwork was done on white or light-colored linen with black thread but today it can be done on dyed fabric with a variety of colors. Blackwork uses a double running stitch technique for filling patterns.  This is reversible in work in the back and the front looks the same. Modern blackwork is used to create geometric designs but it can also be used to stitch beautiful picture embroidery.

It is an imaginative and creative form of embroidery using a scale of fishes design for decorative purposes. The design may include the scales of any fish but the scales of Goldfish and Perch are preferred owing to the variation of colors. Embroidery is done on velvet or other rich fabric. For the design to be perfect it is first drawn on a paper and outlines are stab through a pin and then the patter is placed on a material. The fish scale are prepared and then two holes are made on the base of each fish scale for it to be stitched on the fabric.

Hardanger embroidery is named after a Southwest Norway region in a country of Hordaland by Hardanger Fjord. It was originated from the Middle East and then spread to Europe with a hitch to the Reticella and Venetian needle laces. Reticella is a geometric style having squares, diagonals, triangles, and arcs. Hardanger embroidery is a perfect blend of cutwork, drawn work, and needle weaving. A traditional form of this embroidery was identified by satins, stitch blocks formed into geometric designs, and the cuttings of threads within these shapes.

Zardozi work was originally considered as a symbol of royal patronage and existed in India since the time of Rigveda. This is a type of heavy and complex metal embroidery using a special type of metal thread shaped like a spiral tube. It is done on which fabrics like Silk, Satin, and velvet. Designs are created using gold and silver threads combined with pearls, beads, and precious stones. This type of embroidery is especially found on wedding wears and wedding accessories. 3D look of raised metal threads, gleam, and sparkle of zardozi thread give it an engaging look.

This embroidery was used in the 19th century for women lingerie. Faggotting is a technique of stitching two edges of textile together with decorative stitching creating a zigzag pattern.

Chicken scratch embroidery is done using cross stitching on gingham cloth. This embroidery technique is considered to be unsophisticated and simple as the squares of gingham give grids upon which chicken scratch is worked. Cotton Threads are generally used for this type of embroidery. Though it is a simple form of embroidery by combining stitches and thread weights, complicated patterns can be produced giving it a finer look. This embroidery form is done on household items like aprons, decorative pillows, curtains, kid’s wear, etc.

Crewel embroidery hearts a rich history with its traces in the early Medieval period and an extant historical example Bayeux Tapestry. This embroidery is done using wool threads. This work has gained its acceptance in the Jacobean arena with complex designs of birds, flowers, and beast done on household items and clothes. Nowadays, Crewel work is different from the traditional crewel with the addition of other types of threads being used along with the wool. Silk and cotton threads are combined with wool for this embroidery.

Applique is a technique by which small pieces of fabric or patches are attached to a larger base of material in a decorative pattern. There are three main types of applique work are – Overlaid applique, Inlate applique, and reverse applique. Cut out patterns include geometric shapes, images, and lettering. Generally, the materials used are in contrast in type, color, and texture so that it could be easily identified. This technique is either done by hand stitching or machine.