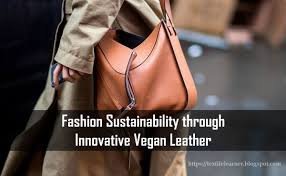 Leather is considered as a luxury material, placing itself at a higher price in the global market. It has been manufactured by humans for at least 4,000 years for applications such as clothing, footwear, automobile and home furnishing. Natural leathers processed from fleece and skins of animal faced a major threat. Raising and slaughtering millions of animals is adversely affecting the biodiversity, besides being insufficient to meet the demands of the global leather market. Later, synthetic leather has been used as an alternative for natural leather. Polyurethane (PU) and polyvinyl chloride (PVC) materials are commonly used for the manufacture of synthetic leather to give leather-like feel and appearance.

Although the production process of leather from synthetic materials is more environmental friendly than natural leather, still it has negative impacts on the environment. During the production process of PVC, carcinogenic byproducts called ‘dioxins” are produced which is toxic to both human and animals. PVC leather material does not decay like genuine leather and release dangerous chemicals into the water and soil. As consumers are becoming more aware of environmental issues, there is a need for ecofriendly biodegradable materials in the leather industry.

Innovative vegan leather made up from sustainable materials

Pinatex is a natural sustainable leather alternative made from the waste of pineapple leaves and a cheap textile material suitable for mass production.  After harvesting the pineapple, the leaves were burned or discarded by the cultivators.  Pinatex is an alternative to natural leather with pineapple leaf cellulose as the raw materials. The production process of pineapple leather consumes the least amount of chemicals and water. The leaves are separated into fibres and biomass (this biomass is converted into biofuels or fertilizers). Then the fibres are felted into a non-woven mesh by forming a net of fibres united by mechanical, thermal and chemical processes’’ and given a protective coating. Around 16 pineapples yield enough fibres to make one square metre of pinatex.

MusKin is a leather-like material made from the caps of a mushroom type called Phellinus ellipsoideus. This mushroom -based leather isn’t produced from edible wild species. The major characteristics of MusKin leather include water-repellent, non-toxic, and durable enough to create fashion items which would traditionally be made out of leather. German brand “nat-2™ makes fungus-made sneakers  make out of mushroom leather which looks like top-selling mainstream brands like Nike or Vans. Besides, the “nat-2™ brand utilizes a parasite fungus found in nature and combines it with eco-cotton and recycled water bottles to produce unique shoes.

The prickly pear cactus has been used as a staple Mexican food, a source textile dyes and for medicinal purposes. In recent years, two entrepreneurs from Mexico have developed durable vegan leather from nopal or prickly- pear cactus leaves.  The cactus materials are flexible, durable, and breathable, and gave a soft feel, very similar to real leather that can be used in several industries like fashion, leather goods, furniture and automobile.

The India-based company “Kanpur Flower Cycling” has developed plant-based leather called “Fleather”. To make Fleather, the company has collected waste flowers from temples, weeded out the non-biodegradable waste such as plastic and thread, then sorted according to species such as rose, mogra and marigold. Once the sorting is done these flowers are broken down into petals by hand. The green portion that remains is used for vermicomposting. The rest of the petals are used for making this leather. The process of making fleather is basically like making curd at home. A flower -based nutritive substrate has been prepared in the lab and then a group of organisms were grown over this nutritive substrate. After 3 weeks, fleather is formed.  Fleather has won a UN Sustainability Award and a PETA India award for best innovation in fashion.

French footwear brand called “Veja” have developed campo shoes, made from a canvas wax, coated with a resin made up from 50 per cent corn waste from the food industry and mixed with polyurethane. It gives the feeling that is similar to leather in terms of touch and elasticity. The corn-derived material is tougher than animal hide, as well as easier to keep clean.

Malai leather is one of alternative vegan leather made up of coconut water. Malai is a newly developed biocomposite material made from entirely organic and sustainable bacterial cellulose, grown on agricultural waste sourced from the coconut industry in Southern India. The raw material, essentially coconut water is collected from a coconut processing unit, and then undergoes sterilization after which bacterial culture is allowed to feed on it. This fermentation process results in a sheet of cellulose jelly which is subsequently harvested, refined, and eventually reinforced with natural fibres, resins and gum. The resultant material is a flexible one that is moulded into sheets that can thereafter be crafted into accessories.

The Italian company “Vegea Company” has developed an innovative process for the production of vegan leather from wine industries. Globally, 26 billion litres of wine are produced every year and almost 7 billion Kilograms of grape marcs are generated as waste. The Italian company has utilized these wastes and transformed into an ecological material, the wineleather. Wineleather has the same mechanical, aesthetic and sensory characteristics of the leather.

Oinam Roselyn Devi is a Research Scholar at Punjab Agricultural University. She carries out research in Apparel and Textile Science. Author can be reached at [email protected]