“The famous dandy manifesto; androgynous silhouette walking the catwalks; the huge gap between yin and yang is no longer there, as the feminine and the masculine present in all of us seem to get along just fine for once.” 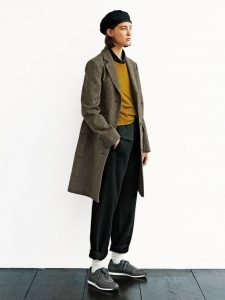 Gender roles have traditionally been well-defined constructs with masculinity being synonymous with aggression, independence, and power; and femininity being associated with nurturance, dependence, and an indifference to being in power. However, in the 1970s, alternatives to the “masculine” and “feminine” sex roles were explored. The concept of androgyny emerged as one of these alternatives – showing that as opposed to the stereotyped gender roles of masculinity and femininity being expressed on a continuum, one individual could present with the most desirable traits from both genders.

The history of fashion is strongly tied to the history of gender and sex. The reason is that clothing has always been used to define gender and its traits.  Social rules have dictated throughout history about how one should dress, based on their gender. Clothing was also encouraging or restricting certain activities, for example: If women wanted to ride on a horseback or run, their voluptuous clothing wouldn’t allow them to.

The term “androgyny” is derived from the Greek words for male and female, and suggests a state between masculinity and femininity. To feminists androgyny represents escape from the prison of gender, from socially enforced preconceptions of ways in which women and men ought to differ in their psychology and behavior (Warren, 1980). In context of fashion in androgyny, it deals with the blurring gender lines of prevailing gender oriented clothing stereotypes. Women in the Victorian era were sued to wearing stuffy, full blown gowns with lace necklaces and petticoats. Chanel was the first to come up with the option of pants and masculine like silhouettes for women in 1913. By doing so, she personified the independent roles women were about to enter. Chanel refused to be called a feminist and defended the idea that people should express themselves based on how they feel, regardless of their gender and what is expected out of them. Whether out of defiance or not, she “mixed up the vocabulary of male and female clothes as reported by TIME. Chanel was believed to be inspired by men’s wear: shirts with clean collars, simple sweaters and loose belted jackets. She liberated women from constructive clothing by making clothes that women could move in comfortably. Her silhouettes spoke a lot about how independent she was.

‘Of course there is a sex war; of course women despise men and of course men are jealous of women. They have lived in different worlds; the man’s world has gone rotten and the woman’s gone silly. Let us start again, as a symbol of our refounded unity of mind, let us wear the same clothes. (Grill.E,1931)

The idea of gender neutral clothing was an unnamed fashion statement which started to spread it wings from 1920’s when Chanel introduced the world to the jumper and it was worn by both men and women. Knitted garments for men really took off in this era and women eagerly wore the same knits too. (Thomas.P 2014)

If I had to name two women in old Hollywood who stood out for their androgynous tendencies and flippant attitudes towards society’s idea of feminity, then they definitely have to be Katharine Hepburn and Marlene Dietrich. The taste for a fierce type of independence and a need to shake conventional gender norms was always on their radar. From Hepburn walking around in her silk underwear on set until her confiscated pants were returned to her to Dietrich kissing a woman on screen while wearing a bow tie and top hat, these women weren’t about to let their gender dictate how they should behave.

Hepburn famously told Calvin Klein, “Anytime I hear a man say he prefers a woman in a skirt, I say, ‘Try one. Try a skirt,'” thus underlining just how laughable the idea of forcing someone into a style solely based on tired gender norms is. When asked if she even owned a skirt, considering she was so famous for wearing pants, Hepburn replied, “I’ll wear it to your funeral.” So, if there’s anyone who has made men’s clothing popular for women, it has to be Katharine Hepburn. She believed that trousers were a symbol of independence and a statement of modernity.

Her insistence on wearing pants, even styled in a “feminine” way, was a genuine scandal. So much so, in fact, that it was listed in her obituaries alongside the fact that she’d won four Oscars.

While working at RKO, Hepburn would wear blue jeans to the studio, but that they had been confiscated from her dressing room while she was on set filming. Far from persuading Hepburn to wear a skirt, she would instead return to the set in her knickers and refused to cover her bottom half until her jeans were returned. German actress Marlene Dietrich who was one of the greatest actress of all time, had a deeply passionate relationship with her wardrobe, both on and off the screen.

She didn’t care about how the society wanted her to dress and instead, cultivated her own style with an androgynous wardrobe in a time when women wore feminine clothing and often said that, “I dress for myself. Not for the image, not for the public, not for the fashion, not for men.”

Dietrich was the first Hollywood actress to wear trousers in public. “Her masculinity appeals to women and her sexuality to men.” said Kenneth Tynan, a film critic.

The most famous aspect of Marlene’s style is her penchant for menswear. She wore masculine three-piece suits to create a distinctly androgynous look that helped to revolutionize and redefine women’s fashion. In fact, during the 1930s, she (along with Katharine Hepburn) helped to popularize and make pants acceptable for women to wear. Marlene and Katherine Hepburn championed this men’s style in their wardrobe. It was something borrowed and new. It worked, made a fashion statement, became a household fashion staple for the right body shape and gets you noticed easily of that is indeed your aim.

Yves Saint Laurent stepped onto the scene in 1966, offering a radical new style that perfectly underlined the more masculine, aggressive role women were embracing. The first tuxedo for women was born.

It was made iconic by famous devotees like Nan Kempner, Betty Catroux and Bianca Jagger and the look told the world that if women are ever going to wear the trousers, they should be able to wear them to their wedding day and Studio 54 alike. This clothing item also was a reason of a revolution that started because of how aggressively male and black-tie bourgeois became a symbol for female emancipation. Dressing up in this garment was considered to be irreverent, daring, bold and on the cutting of fashion, whilst suggesting their alignment with burgeoning feminist politics. Le smoking demanded: “If men can wear this, why can’t I?” 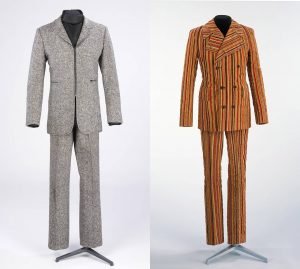 Up until this point, androgyny had focused on women breaking free from their rigid gender stereotypes, but it was men’s turn to shake loose of their gendered tropes and constraints.

As the 1960s gathered pace, the standard template for a man’s suit began to accommodate subtly daring new elements: the collarless jacket (a look popularized by The Beatles in 1963, the year they launched their first album) and slim-fitting trousers, matched with heeled boots rather than shoes.

Flamboyant elements such as embroidery and vividly printed shirts became acceptable parts of the everyday male dress code – in London at least. Circulating in the overlapping worlds of fashion, music, the (newly influential) media and high society, a social group forged a bold new identity – the ‘modern dandy’, unashamed to wear frills, velvet and other elements previously judged to be too feminine for a man.

Just as women were about to experience their second wave of feminism, many men were just as seriously trying to see what they could find outside of their gendered expectations. Some grew their hair long, stole eyeliner from their mother’s bathroom cupboards, dabbled in tight, feminine silhouettes, all largely meant to “break with the conformist traditionalism of their parents, but also as a way to explore and assert their individuality,” as the Berg Fashion Library put it. They were embracing their feminine side without having their masculinity or sexuality come into question. 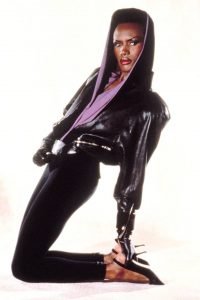 Aside from her incredible voice and addictive blend of R&B/pop/electronic/disco music, Grace carved out a look for herself that has remained as iconic to this day as it was back in the 80s. Her shaved/angular hair, creative make-up and cloaks, suits, hats and costumes have always felt way ahead of their time. Grace Jones, who exuded an aggressive type of femininity: One that was balanced with a hard handed touch of masculinity. With her flattop hair, chiseled features, and buff physique, she walked the line of androgyny perfectly. As her partner Jean-Paul Goude told People, “Men think she’s sexy. Women think she’s a little masculine, and gays think she’s a drag queen.” Feminine/masculine, the beautiful black curls, beauty spot, feather boas, high-necked ruffled skirt…Prince was the King of them all. Delicate and doe-eyed, with his slender hips clad in either a jumpsuit or go-go boots, the legendary Prince had a contradictory appeal to him: He was anything but traditionally masculine. His heels with the thin mustache and the silk suits with the male frame hinted at the fact that sexuality is on a spectrum, much like gender. This hetero man who embraced effeminacy championed the idea that breaking out of gender roles didn’t have to have anything to do with sexuality. It was bigger than that. 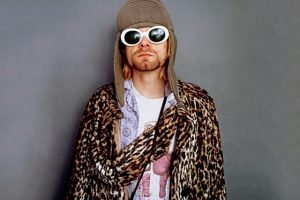 He dressed in layers, including flannels, wool sweaters and thermals because western Washington is wet and cold.

He also dressed in mismatched clothing out of necessity. his clothes were a mix of hand-me-downs, thrift store finds and clothes from Army-Navy surplus stores. He also didn’t own many clothes. Grunge, was truly anti-fashion – at least until the fashion industry caught wind of it, and that’s when the backlash to grunge truly took off.

Kurt Cobain played with his long blonde locks, eyeliner, and babydoll dresses. He rocked the hell out of sweaty grunge shows while wearing tiaras, sweeping up dirty tresses into pigtails, and sporting retro women’s sunglasses that looked more like they belonged on a roller skate diner waitress than on a rock legend.

Borrowing from each other’s closets was helping both men and women express the different sides of themselves that didn’t fall into neat binaristic categories. 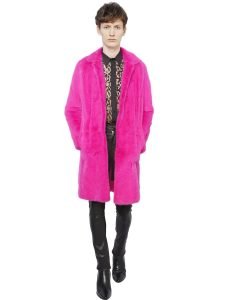 While it might have seemed like a novel idea when creative director, Alessandro Michele sent men down his 2015 fallGucci show in granny chic pussy-bow blouses and Audrey Hepburn-esque shrunken sleeve pea-coats, or when Saint Laurent marched male models down the catwalk in high heels and hot oink fur coats, it’s easy to see that androgyny isn’t new. Our need to define ourselves on our own terms, express ourselves in the way we feel on the inside, and not live according to a gender norm rule book has been long present.

Todays, androgyny is in trend but it is quite different form what it was earlier. Androgyny can be something to do with both masculine and feminine features and it can also be about neither of the two i.e. non-gender referential. The latter can be noticed exclusively these days. If there’s one word that I would use to define androgynous fashion, that would be “ gender fluid”. The whole idea behind androgynous fashion is to deconstruct or destroy the concept of gender when it comes to clothing, to create a neutral image and allowing people to wear clothes however they want to. 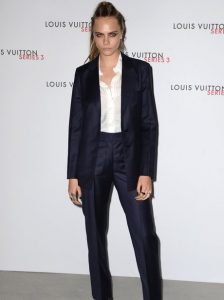 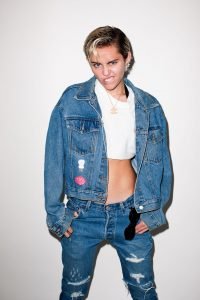 The Evolution Of Androgynous Fashion Throughout The 20th Century — PHOTOS

The Most Daring Thing About Katharine Hepburn? Her Pants | Vanity Fair